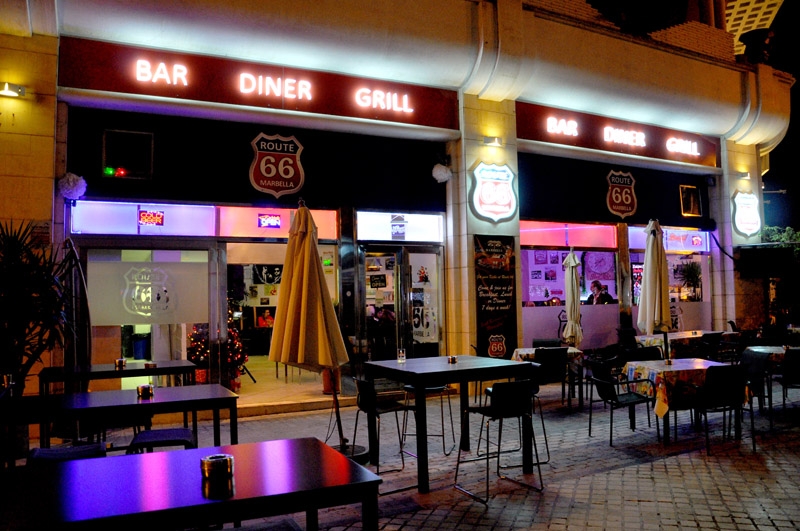 ROUTE 66 is looking to 2013 with enthusiasm and excitement.

Since launching six months ago in times of austerity, the American diner in Puerto Banus has gone from strength to strength.

The brain child of Nigel Wilson, and Pat and Camille Dean, this traditional restaurant is lively, welcoming and serves up delicious dining, showing all major sporting events on their outdoor terrace and dedicated sports bar.

Nigel explained: “We decided to create a luxurious American bar and grill, which has been very successful from the beginning.”

Throughout its six month reign, Route 66 has been the place to be seen, with many premiership footballers visiting. Frequent diners include Peter Crouch and his wife Abbey Clancy, Stephen Carr, Ledley King, Scott Sinclair, Titus Bramble and Brendan Rogers; even Glenn Johnson tweeted about Route 66 having the best T-bone steak he had ever eaten!

Route 66 is open from 11am until late, seven days a week, with live music every weekend.

Aaron Harding and Mark Connor and the legendary Mel Williams always get the crown going, with Cabaroki, a blend of cabaret and karaoke, on Saturday nights, with a prize for the best act.

“Friday nights and Sunday lunch are rock and roll themed” explained Nigel. “The latter has been a revelation to us, with the traditional roast dinner and all the trimmings always attracting big crowds.”

Serving the traditional American dishes including their renowned T-bone and homemade burgers, they also have options for light bites and vegetarians. Recent additions to the menu include asparagus with a poached egg, Shichimi calamari and a burger of stuffed aubergine. Even their kids menu is popular, just €5.66.

Also their wine list is reasonably priced considering their location, with fruity cocktails and shakes available, and a beer is only €3.50.

The Missouri cheese grills, our choice of triple cheese and onion, were lightly toasted sandwiches, crammed full of filling. Other options include or cheese and jalapeno, ham and cheese or bacon and cheese.

The 66 pasta with asparagus, pine nuts, tomatoes, garlic, rocket and basil was topped with shaved Parmesan cheese and coated in a tomato based sauce.

And we couldn’t dine in an American restaurant without sampling their famous flame-grilled burgers. The half pounder, made from 100 per cent beef, was nestled between two soft buns, filled with Jalapenos and served with crispy fries. All burgers at Route 66 are homemade, adding to the authentic flavour from the chefs who have a bundle of experience in the business. Erlyn de los Reyes has worked in Yanx restaurant in Nueva Andalucia, and Donald Nonan draws his experience from working in Jacks restaurant and the Hard Rock Cafe, both in Puerto Banus, all traditionally American in their offerings.

With its location in Plaza Antonio Banderas, 100m from the port, Route 66 has been a hive of activity since its inauguration and is set to take 2013 by storm, with their one-year anniversary on June 7 already on the lips of many.