Impossible is Nothing, Malaga CF vs Levante football team 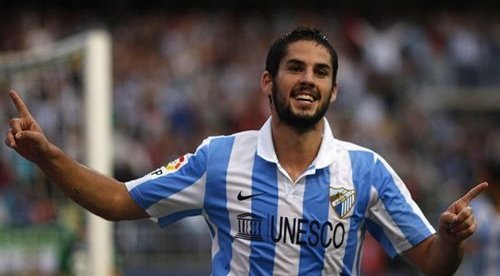 It seemed impossible, but finally Malaga Football Club managed to win in the field of the Levante Team at Valencia, Costa Blanca. In a mixture of good play and great tactics, Malaga CF broke the walls of Levamte to take hold  the fourth place in the Spanish Football League, the last giving access to the Champions League. Pellegrini’s men overcame the match thanks to two goals from Isco growing by weeks. Malaga´s players did a great job and the coach did an excellent tactical planning.

The Malaga CF showed a high play level in a stadium almost impossible. Pellegrini surprised us with Baptista, who had just played a few minutes last week after sixteen months away from the pitch. But that was not the only change in the Costa del Sol´s team, the defender Antunes, Sergio Sanchez, Iturra and Saviola, replace Lugano, and Santa Cruz Camacho. The coach did this changes before the Champions League match on Tuesday, 19th February against PORTO football team.

Isco, Saviola, Baptista and Joaquin offered a flashy game, but no depth. Levante, however, broke the counterattack.

The Costa Blanca Team, pressure started to grow, while the Malaga CF were delayed. Hence the two good chances before the end of the first half. Ruben lost a clear goal against Caballero, Malaga Goalkeeper.

And not long enough for the 1-0 the referee´s whistle a penalty of Demichelis to Martins. Who Barkero scored. This reactivated Malaga CF, who needed a win to consolidate in the upper area of the table. After nine minutes a  penalty to Baptista, when Malaga was playing good and Isco great goal kick.

Malaga FootBall Club were starting to feel comfortable and to display their favorite game. The Levante team crashed with a massive tactical strategy, decorated by individual actions like Joaquín and Isco, and the active and dangerous presence of Baptista. Meanwhile, Toulalan and Iturra stopped Levante´s players when recovering the ball.

Captain Baptista still would try again before the first half in a very dangerous shot that cleared a corner Munúa with difficulties. But soon after starting the second period Isco picked up the ball on the edge of the area and fired to convert the second goal. AMAZING GOAL of the Benalmadena´s Golden Boy Player. Levante went on the attack with all their weapons, including play hard in some cases.