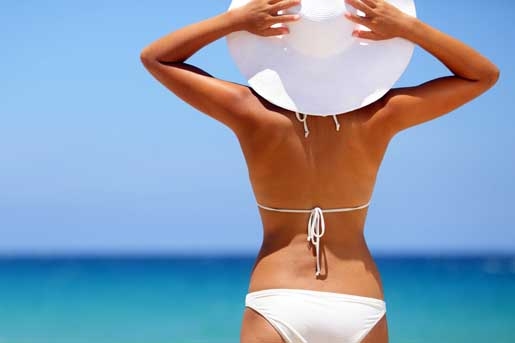 IT IS that time of year again! You know, when you’re clobbered on all sides – on TV, in the press and on billboards – by international beauty companies’ airbrushed ads chivying you to  get “beach ready” for  the holidays.

The same airbrushed ads, you’ll recall, all-too-soon chivying you to get ‘party ready’ for the Christmas season and, shortly after, ‘New Year ready’.

Like a carousel, the same ads come round and round with such regularity you could set your clock by them. Always involving slathering on loads of creams and dieting. Lots of dieting.

And with the same super skinny, super young, super models who look as though they and food have never come in contact.

Which reminds me of the comment by a former Vogue editor that it’s common practice for top models to eat tissues so they don’t feel hungry and so maintain their size zero figures.

Whatever your view, these ads are specifically designed to stimulate spending based on perceived inadequacy.That’s what they’re there for.

Youth is an all-too-ephemeral commodity. No money can buy those years back, even though every beauty company in the world is clearly up to every trick in the trade to persuade you otherwise.

And if you don’t like them, the simple answer’s to ignore them or, at the very least, consider why they’re there. The reality is that they’re designed to sell stuff and can only target pre-existing needs/ fixations (in some cases, bordering on neuroses) such as body image issues.

Take a recent survey that reveals 56 per cent of British women are too embarrassed to wear a bikini on the beach. A third are too ashamed to let their partner see them naked and another third don’t going swimming to avoid exposing body ‘faults’.

Enough women are so obsessed by their appearance that it makes economic sense for the vast multinational beauty industry to target the vast majority of its vast advertising budget at them and, increasingly, young girls. (A UK Government study reveals girls, too, aren’t altogether happy because of, umm, body image issues.)

Still, mustn’t be negative.  Surround yourself on Spanish beaches this summer with tourists from other countries who don’t share this peculiar British obsession with bikini bodies then nobody’s going to mind what the heck you look like!