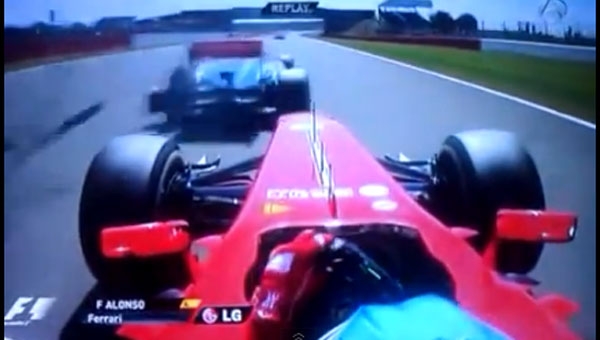 Sergio Perez had a tyre explode during the Grand Prix

Nico Rosenberg won the British Grand Prix at the weekend for Mercedes, with Mark Webber taking the second position and Spain’s Fernando Alonso in third place.

However, the race at Silverstone was not without problems as tyres exploded sending debris all over the track into the path of other vehicles almost bringing the race to a close as race director, Charlie Whiting, had to decide whether to allow the race to continue.

The drama started in lap eight, when Lewis Hamilton’s left rear tyre ruptured as he turned through the Aintree corner into the Wellington straight. The rubber looked like string as what remained hung on to the wheel, the rest of the steel-reinforced tyre hurtled down the track in chunks.

Two laps after Hamilton’s misfortune, Ferrari’s Felipe Massa suffered the same fate at the same place. Five laps on, Toro Rosso’s Jean-Eric Vergne’s left rear blew just before the pit lane, his rubber spinning like a cartwheel. The safety car came out while marshals darted on to pick up the pieces.

Lap 29, the Sauber of Esteban Gutierrez had his front left explode.  Finally, on lap 47, Sergio Perez’s race was ended when his left rear ruptured. It took to 20 the number of times this season that Pirelli’s tyres have given up on the men whose safety depends on their adhesive qualities.

One of the problems is that Pirelli are using a steel rather than Kevlar band this year and it has proved less durable so now they have offered to revert to Kevlar. But the teams who have discovered how best to use the new steel-based tyres — Ferrari, Force India and Lotus are unwilling to lose their advantage and change back to the old tyres. The FIA will have to make a decision before the German Grand Prix next Sunday, even if the Nurburgring is a less likely to destroy the tyres than Barcelona and Silverstone, both of which place a greater strain on the vulnerabilities of the Pirelli design because of their high speed.