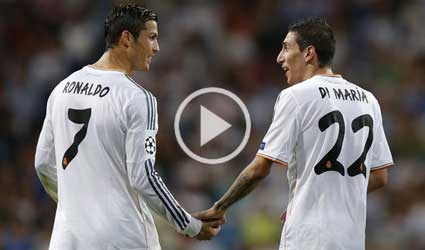 MADRID (Reuters) – Cristiano Ronaldo took his Champions League tally to five goals in two outings this season when he scored with two headers to help Real Madrid to a thumping 4-0 victory over FC Copenhagen in Group B on Wednesday.

Angel Di Maria also struck twice at the Bernabeu and set up Ronaldo’s second goal as Real put a couple of poor performances in La Liga behind them with another emphatic display in Europe following their 6-1 drubbing of Galatasaray last month.

The home team’s firepower proved too strong for a stubborn Copenhagen side who despite struggling domestically put up some stiff resistance in their first meeting with the nine-times European champions.

Portugal forward Ronaldo followed up his hat-trick in Istanbul with another sparkling display and Argentina winger Di Maria also turned in a fine performance in the absence of injured world record signing Gareth Bale.

“It was a good match,” said coach Carlo Ancelotti who came under fire after Real were beaten 1-0 at home by Atletico Madrid at the weekend.

“There was some good intensity and balance at the beginning,” the Italian told reporters. “We were trying to score until the final minutes and the attitude of the team was good.”

Ancelotti made a few tweaks to his formation for the visit of the Danish side who held Juventus to a 1-1 draw in Copenhagen in their opening game.

Luka Modric, Sami Khedira and Asier Illarramendi were deployed in a three-man midfield, with Karim Benzema up front alongside Ronaldo and Di Maria and fullbacks Marcelo and Dani Carvajal providing width.

With their fans providing impressive encouragement high up in Real’s giant arena, Copenhagen made a bright start but the hosts quickly asserted themselves and Benzema headed narrowly wide from Marcelo’s left-wing cross in the sixth minute.

Just as the home supporters were starting to grow restless, Ronaldo opening the scoring in the 21st minute when goalkeeper Johan Wiland failed to deal with Marcelo’s floated cross and he nodded in from a tight angle.

Real centre back Pepe then needed treatment to a head wound after clashing with Daniel Braaten before Copenhagen went close to an equaliser from a corner five minutes before the break.

Nicolai Jorgensen beat keeper Iker Casillas to the ball and his header bounced down off the crossbar before appearing to strike Modric’s hand on the line.

The Croatia midfielder was able to clear the danger but there were whistles of discontent from the home fans as the players trooped off at halftime.

Ronaldo, however, settled the nerves in the stands with his second 20 minutes into the second half, his 55th goal on his 94th appearance in Europe’s elite club competition and his 26th in his last 21 Champions League outings.

The 2008 World Player of the Year burst into the penalty area and powered Di Maria’s clever chipped cross past Wiland.

Di Maria netted a fine curling effort six minutes later after cutting in from the right and another in the first minute of stoppage time as Real secured a maximum six points from their first two matches.

Copenhagen have one point along with Galatasaray who drew 2-2 at Juventus (two points) on Wednesday.