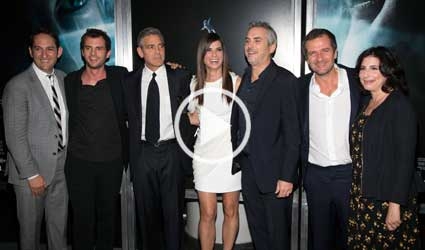 LOS ANGELES (Reuters) – “Gravity”, a new 3D thriller about two stranded astronauts floating through space, soared to the top of weekend movie charts, setting a box office record for the month of October by pulling in $55.6 million (34.7 million pounds) at U.S. and Canadian theatres.

The film, which stars Oscar winners Sandra Bullock and George Clooney and wowed critics with its special effects, added $27.4 million from sales in international markets, for a combined debut of $83 million, distributor Warner Bros. said on Sunday.

Last week’s box office winner, animated “Cloudy with a Chance of Meatballs 2,” dropped to second place with $21.5 million from Friday through Sunday. “Runner Runner,” a new drama about the dark and murky world of online gambling, finished third after earning $7.6 million.

“Gravity” defied the most optimistic pre-weekend forecasts from box office analysts, who saw the film starting off with up to $42 million at U.S. and Canadian theatres. It beat the previous October record, the $52.5 million opening for “Paranormal Activity 3” in 2011.

In “Gravity,” Bullock plays a novice astronaut and engineer alongside Clooney as a mission commander. After an accident caused by flying debris, the pair are sent hurtling into space with depleting oxygen and remote chances of returning to Earth.

Critics raved about the visual effects in the film, which cost close to $100 million to make and reproduced space and zero gravity in ways never seen on screen. Eighty percent of “Gravity” filmgoers purchased the higher-priced 3D tickets, Warner Bros. said.

Overall, 98 percent of critics recommended “Gravity” in reviews collected on the Rotten Tomatoes website, with many suggesting Bullock will be a contender for another best actress Oscar.

“Runner Runner” was far less popular with critics, scoring a meagre 8 percent positive rating on Rotten Tomatoes on Saturday. The movie stars Justin Timberlake as a graduate student who goes to Costa Rica to confront an online gambling tycoon, played by Ben Affleck.

The movie was produced by New Regency for $30 million and distributed by 20th Century Fox, the film studio owned by 21st Century Fox.

“Cloudy 2” has now earned $60.6 million at domestic theatres since its release a week ago. The movie features the voices of Bill Hader and Anna Faris as characters in a world where food has come to life as food/animal hybrids called “foodimals.”

The week’s other top films included “Prisoners,” a drama starring Hugh Jackman as a father searching for his missing daughter, which took in $5.7 million. Car racing drama “Rush” took the No. 5 slot with $4.4 million.

Also this weekend, Sony released “Captain Phillips” in 800 theatres on Saturday to build advance buzz ahead of its wide release next Friday. The film stars Tom Hanks as the leader of a ship hijacked by Somali pirates. A Sony spokesman said he did not have a dollar estimate for Saturday’s showing but said theatres were 75 percent full.