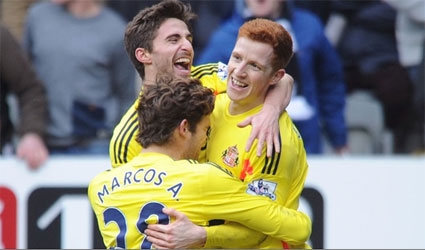 Last weekend Sunderland beat Newcastle 3-0 – their third successive win in the North-East derby. The last time they achieved this was almost 90 years ago. Stoke eclipsed Manchester United for the first time in 30 years, winning 2-1; Everton bounced back from their 4-0 Merseyside defeat by beating Aston Villa 2-1; WBA held Liverpool 1-1, Manchester City lost 1-0 at home against Chelsea.

Leicester extended their lead at the top of the Championship to ten points (66-56) with a 1-0 win at Bournemouth and Brentford lead Wolves by two in FL1.

Atletico Madrid are top of Spain’s La Liga for the first time since 1996 after beating Real Sociedad 4-0. Cristiano Ronaldo was sent-off in Real Madrid’s 1-1 draw with Bilbao, Barcelona lost 3-2 at home to Valencia, Almeria were beaten 1-0 in Elche and Malaga took out Sevilla 3-2.

So far this season, top flight clubs in England have spent a record £780 million on players, beating the previous best by £90 million set in 2008-09.

Arsenal signed Swede Kim Kallstrom – but he’s out for six weeks after injuring his back playing beach volleyball!

LAST GASP DEFEAT – England, leading by six points with three minutes remaining, were pipped at the post 26-24 by France on the opening day of the Six Nations campaign. Elsewhere, reigning champions, and sluggish Wales beat Italy 23-15 and Ireland slammed Scotland 28-6.

FLOWER OUT IN JANUARY – After a quite disastrous tour down under when they won only one of 13 cricket matches against Australia, England have parted company with head coach Andy Flower. Either South African Gary Kirchen or Warwickshire’s Ashley Giles could take over. Meanwhile Scotland – after beating Kenya – have been drawn in England’s group for the 2015 World Cup in New Zealand.

GREAT WIN – For the first time since 1986, Great Britain are in the quarter-finals of the Davis Cup after defeating the USA in San Diego, California. Star of the show was Andy Murray who won both his singles matches.

COLD OLYMPICS – Eighty-eight countries will be taking part in the 2014 Winter Olympics which starts in Sochi, Russia today. Team GB will be aiming to win at least four medals. In fact, they have never won one on snow – on ice, yes.

DID YOU KNOW?  West Ham have had 14 managers in 112 years; QPR have had eleven in the last decade. And batting against Australia in 1947, England wicket-keeper Godfrey Evans took 97 minutes to score his first run.