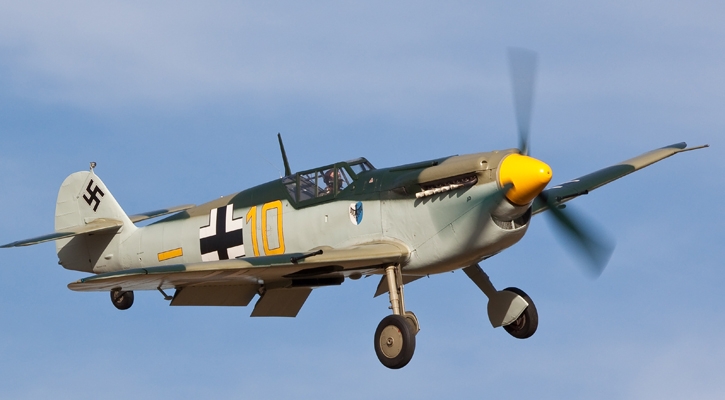 The enclosed photo is of a Spanish built, Rolls Royce Merlin engined HA-1112 that operates from Duxford, England. It is still painted in the Luftwaffe markings it wore for the 1969 film Battle of Britain to represent a German Messerschmitt Me 109.

THE EuroWeekly News, reported that five former Spanish fighter planes were being sold from a warehouse in Texas, USA and said that they were never used by the Spanish or German Air Forces, but were only used as Hollywood props. This is not quite correct.

The five aircraft are Hispano Aviación HA-1112 which was a Spanish licensed-built version of the famous German Messerschmitt Me 109 of World War Two. The Germans having supplied Franco with aircraft during the Civil War, the Spanish continued to build these themselves both during and after World War Two.

After the war the Spanish were unable to obtain further German engines so fitted Rolls Royce Merlin engines purchased from UK to fit to their licence-built Me 109 airframes. This became the Hispano HA-1112, known as the Buchón. Ironically it was the Rolls Royce Merlin engine that powered the Spitfires and Hurricanes that fought the German Me 109s over England in 1940 during the Battle of Britain.
The Spanish Air Force, Ejército del Aire, continued to operate the Hispano HA-1112, including the five aircraft now for sale in USA, until 1968. These five aircraft, and approximately 20 more were purchased from the Spanish Government by the makers of the 1969 film “Battle of Britain”, United Artists, and flown to UK for the flying sequences of the film.

The aircraft playing the part of German Messerschmitt Me 109s. The aircraft being painted in Luftwaffe markings over their Spanish Air Force markings.

At the end of the filming these particular five were purchased by a Texan pilot who had flown them for the film. He then stored them in a warehouse in Texas for the next 45 years where they are now for sale for at least €600,000.
A number of restored Hispano HA-1112 Buchóns continue to fly in Europe, mostly painted to represent German Me 109s.