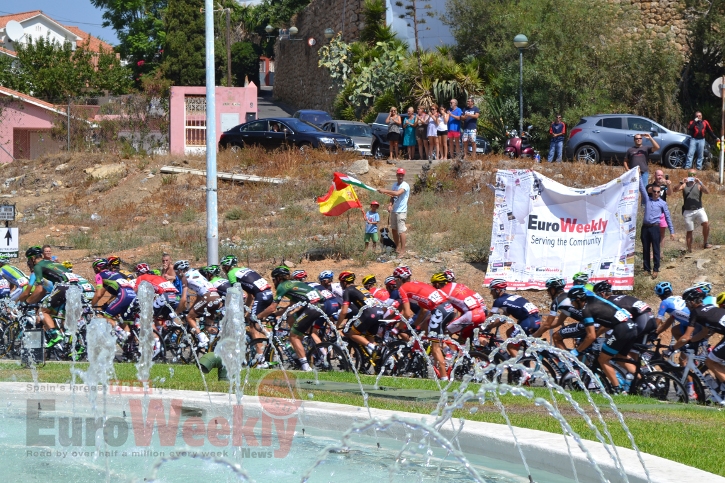 The full entourage of La Vuelta arrived on the Costa del Sol today amid much anticipation that the first real test of the 2014 tour faces the riders.  The stage runs 167km from the beachside Benalmádena to the mountains beyond Granada in La Zubia.

Prior to the race beginning, organisers announced that next year’s Vuelta will start in the province of Malaga. It will be the 70th Vuelta and the 80th anniversary. “Recently, we’ve often come to this part of Spain and it always went well, it’s logical to have a start at the Costa del Sol”, explained Vuelta director Javier Guillen. “The first three stages will be in the area, maybe the fourth one as well.”

As the grand departure geared up to leave at 13.00 hours the mercury climbed to 33ºC. The first 9km were taken at a leisurely pace as the cyclists and outriders paraded from La Paloma park along the seafront towards Malaga. Twenty minutes into the race and Pim Ligthart the Dutch rider who tried a solo break yesterday was off again, this time joined by Spanish rider and current leader in the King of the Mountains category Lluis Mas Bonet. After a few moments other riders from the Peleton attempted to cross the gap between them and the main leaders. The Peleton, perhaps zapped by the heat, are having none of it and hauled the wannabes back in.

After just over an hour of riding Ligthart and Mas Bonet have extended their lead to nearly nine minutes over the field and continue to turn the pressure on the big name climbers who are expected to flourish today.

Euro Weekly News will report the race result later in the day.

UPDATE: Pim Ligthart played his wildcard credentials for the second day on the trot and headed off on a break with Lluis Mas Bonet. At one point they held a lead of 9m 30 seconds over the main pack.

Sadly, the peleton does not like brave souls who break ranks from the crowd and about the 50km to go mark, started to reel the intrepid duo in. The category three climb Altos de los Bermejales saw them still ahead by less than eight minutes with a mere 30km to go. The Russian Team Katusha, with Spaniard Alberto Losado as leader signalled that enough was enough and sent three riders to bridge the gap between breakaway and haul them in.

As they entered the fourth hour of the race Ligthart and Bonet had been riding at an average speed of 36kph. With 15km to go to the summit at La Zubia, the lead was down to 3m 20s.

Sixteen kilometres later it was all but over for the breakaway with a 15 minute climb ahead of them and the lead down to 20 seconds. Ligthart dropped Bonet and climbed on valiantly until being caught with 3km to go. Within a few minutes, the big dogs all came to the front of the Peleton. Valverde, Quintana, Contador and Froome. Only 40 riders are left in the peleton. Cadel Evans the Australian is dropped as is his compatriot and race leader Michael Matthews.

Alejandro Valverde had been setting the pace for his teammate Nairo Quintana on the steep final climb when Katusha’s Rodríguez attacked with 700m to go. At one point it looked as if the Spanish climber was set to drop the group of leading contenders until Froome and Valverde responded, with Contador hanging on behind them. Valverde dragged himself across the gap and edged ahead only to see Rodríguez deflate and drop away, as Froome and Contador crossed the line.

Alejandro Valverde, the man from Murcia, now sits atop the leader board with only 41 seconds separating the top five.