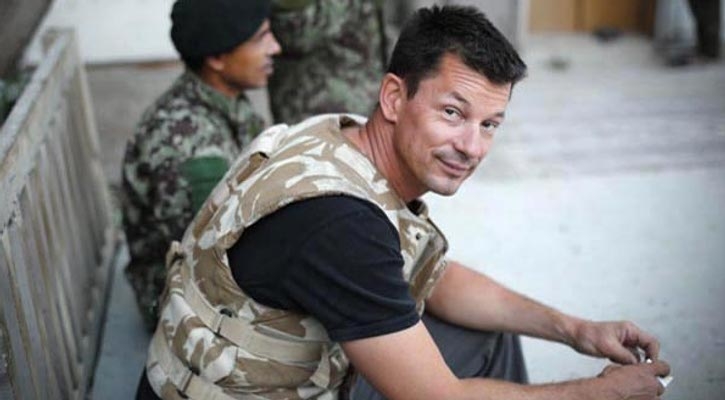 ISLAMIC State terrorists have released a new video featuring British war photographer John Cantlie, who appears to be a hostage of ISIL.

The three-minutes-and 21-second-long video called ‘Lend me your ears,’ is addressed to the West and differs from the previous three videos in that there is no execution, and that the supposed hostage addresses the camera from behind a desk.

Cantlie, wearing the now infamous Guantanamo-style orange clothing, is a war photographer and correspondent kidnapped by British Islamic extremists in 2012 whilst crossing into Syria.

The video appears to have been filmed sometime this year, although the exact date of filming is unknown.

Cantlie admits to being a prisoner of ISIL, and says that his fate is entirely in their hands. He states: “Now, I know what you’re thinking.

“You’re thinking: ‘He’s only doing this because he’s a prisoner. He’s got a gun at his head and he’s being forced to do this.’ Right? Well, it’s true. I am a prisoner, that I cannot deny.

“But seeing as I’ve been abandoned by my government and my fate now lies in the hands of the Islamic State, I have nothing to lose.”

He says that whilst other western governments have negotiated the release of their nationals, the US and UK have not, effectively leaving their prisoners behind.

He goes on to say that the video will be the first of many, in which he will explain ISIL’s philosophy to the global public, revealing ‘manipulated truths’ used by the Western media.

Criticising the UK and US governments, he says: “After two disastrous and hugely unpopular wars in Afghanistan and Iraq why is it that our governments appear so keen to get involved in yet another unwinnable conflict?

“I am going to show you the truth behind the systems and the motivation of the Islamic State and how the western media  twists and manipulates the truth to the public. There are two sides to every story: do you think you are getting the whole picture?

“The UK and US governments have acted differently. [Other European governments] negotiated and got their people home while the British and Americans were left behind.

“It’s alarming to see where it’s all heading. It’s time to change the events, but only if you, the public, act now.

“Join me for the next few programmes and I think you’ll be surprised at what you will learn.”

It appears that he is being used to communicate ISIL’s opinion to the general public.

If what he says is true, the world can expect further videos to be released in the near future: videos showing ‘the truth’ according to Islamic State.

He reflects: “Maybe I will live and maybe I will die, but I want to take this opportunity to convey some facts that you can verify.

“Facts that if you contemplate, might help preserving lives.”