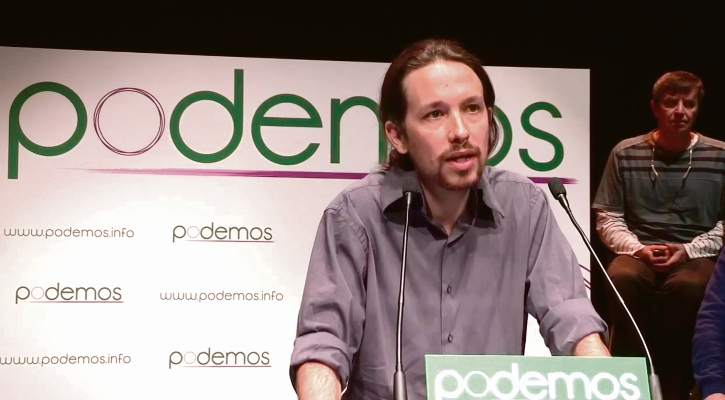 PABLO IGLESIAS, secretary general of Podemos, has a solution for the Catalans.  The party born of political disenchantment and the 11-M movement before the 2011 elections offers a perfect answer for Cataluña. Neither outright independence, nor subject to the constraints of Madrid, but still happily within the fold in a Spain governed by Podemos.

“Do I want Cataluña to go? I don’t,” Iglesias said during a recent visit to the region. “But I know that the Spanish caste has insulted the Catalans.”

He steered oratory away from independence and concentrated on the issues that currently beset the country’s population, swiping at the PP, the PSOE and also CiU. The party that governs Cataluña is also part of the caste, according to Iglesias.

A poll by the regional government’s opinion studies’ centre CEO showed the ‘No’ faction overtaking ‘Yes’ vote on independence. There has been talk of a third way for Cataluña, but Iglesias is offering a fourth, which could account for smiles that were even wider than usual.

So wide, indeed, that Bugs Bunny after orthodontics came to mind.

ON hearing that 37-year-old unemployed Daniel Perez Berlanga had driven a car bomb into the PP party’s headquarters in Madrid, more than one Spaniard could understand why.

All politicians are the same, said financially ruined Perez, echoing the views of many. In fact he had wanted to leave his car loaded with two butane canisters and home-made explosives at the parliament building, but Perez who lives in a Teruel village was unsure of its location. Instead he settled for PP headquarters although he could just have easily chosen the PSOE’s.

Nevertheless there was relief, and not only amongst politicians, to learn that Perez has mental health issues and has had problems with drugs.  Relief because blowing up politicians is no answer to the country’s problems. Violence only breeds more violence – and it doesn’t get anyone back in work, either.

SPAIN’S Attorney General Eduardo Torres-Dulce resigned “for personal reasons.” De-coded, this meant that because he could not be sacked, the government made life difficult enough to push him into resigning. He refused to jump through the government hoop too many times, but above all he had not been forgiven for one huge transgression. He backed the decision to remand the PP’s ex-treasurer Luis Barcenas and let the public peer into a murky world of bribery and corruption.

It takes two to tango and voters have seen that it takes two for corruption to take hold.

SPAIN welcomed the normalisation of relations between the US and Cuba, as “very hopeful,” according to Foreign minister Jose Manuel Garcia-Margallo.

Tangentially he should benefit too: Raul Castro fobbed him off with the regime’s second-in-command Miguel Diaz Canel when he visited Cuba last November. Next time round he might get the boss-man himself.