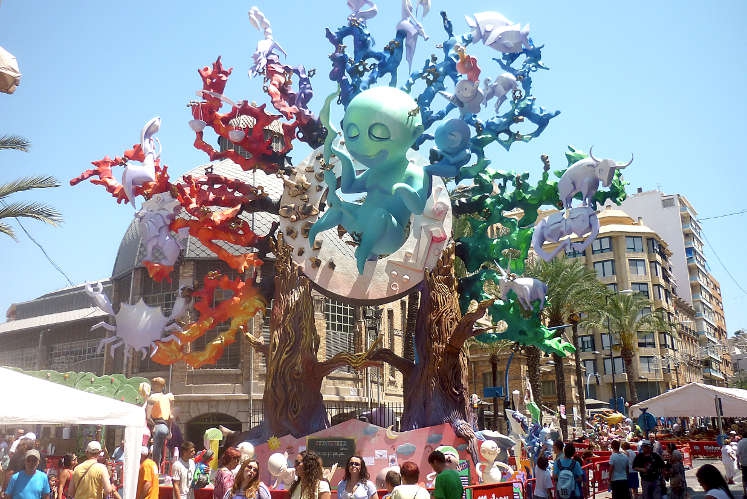 THERE are calls for the Hogueras of San Juan to be declared an Asset of Intangible Cultural Heritage.
The Culture Committee of the House of Representatives has approved a non-legislative proposal that calls for the status to be given to the annual fiestas.
The proposal, at the request of the Partido Popular (PP), has received support from other parliamentary groups, and suggests that this designation would be made in accordance with the Law on the Safeguarding of Intangible Cultural Heritage Assets, which was adopted in May this year.

PP spokesman Juan de Dios Ruano argued that “the Hogueras de San Juan constitute a ceremony as part of the general collective imagination of the Spanish that has been transmitted generation after generation throughout our country.”
Towns and cities across the province have been transformed with the sights of paper mache, wood and plaster creations, depicting everything from cartoon characters to political personalities as the area once again came alive with the annual celebrations of San Juan.
In Torrevieja, the districts of Acequion and Molinos del Calvario celebrated the fiestas and set up their own Hogueras (bonfires) with a drag act and street party entertaining the crowds before the bonfires started and in San Fulgencio, pupils at the Jose Maria Manresa school also created their own effigies before they were set alight in the school playground with the assistance of the local fire brigade.
The Mayor of Valencia, Joan Ribo (Compromis) also visited the Bonfires of San Juan in Alicante – the first time a Valencia Mayor has been in over 30 years and commented on the “transmitting warmth” between the two main cities of the Region.
Red Cross volunteers on duty in Alicante for the San Juan celebrations had a busy Saturday night on June 20, answering 62 calls for assistance and making 12 hospital transfers.
A Red Cross spokesperson confirmed that 50 cases were treated in Cruz Roja tents in the area near Postiguet Beach including minor skin ailments and injuries, three burn victims, bites, heart incidents and 26 assaults related to excess alcohol intoxication. The hospital transfers went to the Alicante Hospital Vistahermosa Clinic in cases where stitches were required.
The Red Cross team comprised of 14 volunteers as well as aid workers, ambulance drivers and nurses and the deployment of two ambulances.