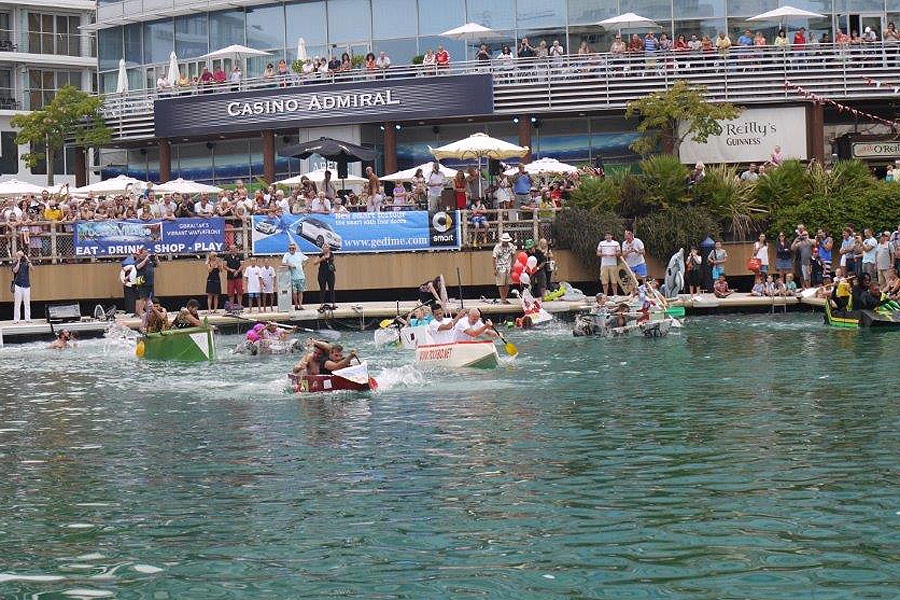 THE annual Charity Cardboard Boat Race in Gibraltar set sail on Saturday (August 22) for the seventh year. It’s one of the few charity events you expect to sink like a stone, and be all the more fun for it.

All the action took place in the Ocean Village Marina, under the organisation of the local RAOB, William Tilley lodge.

As per tradition, the competing ‘boats’ were showed off at Casemates Square, where judges chose their favourite designs and fancy dress outfits, and cast their eyes over the structures to make sure no crafty craft builders had sneakily used any banned substances – plastic, wood and foam.

Then it was time for the real action to get under way at the marina. Winners of the noon children’s race were ‘The Sinking Slice’ from Pizzeria Plaza, who picked up a haul of prizes.

In fact it was a clean sweep for Pizzeria Plaza with their adult team also scooping victory in the very same boat, ‘The Sinking Slice,’ and they walked away with a La Sala Gibraltar voucher for their efforts. It wasn’t without controversy though, as they jumped the starting gun.

With a handful of vessels immediately sinking, it was impossible to conduct a restart, but Pizzeria Plaza were allowed to keep their trophy by virtue of an eventual 20-length winning margin.

O’Reilly’s had been pre-race favourites, having won the adult event five years running from 2010-2014, but they didn’t leave empty-handed and were handed Best Titanic Sinking – despite not actually sinking.

Their cardboard boat converted to a submarine for 90 per cent of the race with the two oarsmen managing to valiantly make it to the finishing line holding their breath.

The Boat Design accolade went to the colourful Cool Runnings-inspired bobsleigh ‘Tallulah’ from JP Haulage, with Whim ‘HMS Sinkalot’ claiming Best Fancy Dress. Miss Gibraltar 2015, Hannah Bado, was tasked with handing out the prizes, all donated by a host of local businesses.

All proceeds from the day went to Diabetes Gibraltar, Calpe House, The Scouts Association and GBC Open Day.