Our first New Year’s Eve here. In a brothel. With my wife! 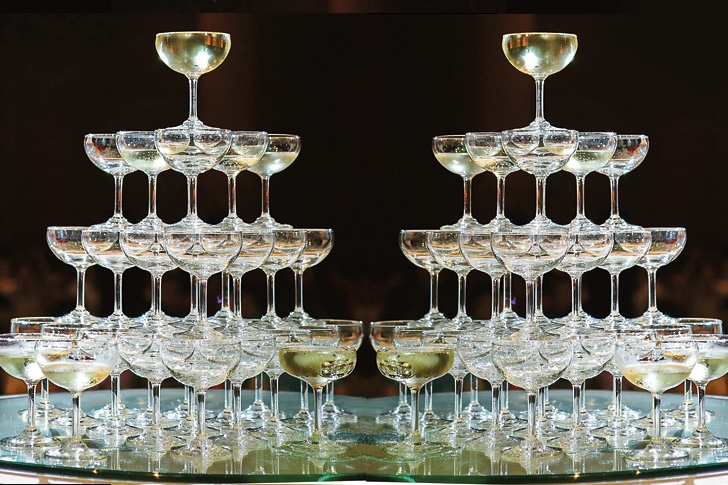 PYRAMID OF GLASSES: Were subsequently filled with bubbly.

IT all happened unexpectedly. We had nothing to do New Year’s Eve and were searching for a venue. Felipe, head electrician, invited us to attend a new bar opening. We aptly agreed and I rushed home to tell my wife.

I probably should have gotten suspicious when I was handed a very detailed map (printed) with small hash marks indicating where a road should be, but wasn’t. The event was to take place on the far side of Aguilas.

When we arrived and stepped into the place, lots of middle aged women wearing extraordinarily short skirts and displaying more cleavage than the Grand Canyon rushed toward us, until Karen strolled in behind us.

Felipe staggered over with a girl wrapped around each arm. They were singing and very plastered. He approached me and slapped me on the back of my head, and said in Spanish, “you stupid or what? You don’t bring your wife to a putey club!”

I mumbled a rude reply but it was all lost in the merriment. Farmer types stumbled in, wandered over to our table and just grabbed Karen by the arm to pull her to the dance floor. But I wasn’t permitting any of that. Nor did Felipe. He became very irate, ecstatic tearing a strip off the intruders.

We all sat in the corner and watched the shenanigans unfurl. It was rough. Just what you’d expect in a wild west bar 200 years ago. Lots of girls screaming when touched inappropriately, but culprits were forgiven instantaneously and all carried on as before. We ordered lots of drinks and talked amongst ourselves.

I felt sincerely relieved as I don’t think the wife caught on to the actual situation. She presumed people were like that on the far side of Aguilas.

As the clocked ticked down to midnight Felipe asked permission to dance with Karen. I granted it and he did so on top of our table. When the song finished he filled the table with Champagne glasses, the Maria Antoinette type, building a pyramid.

When it was almost a metre high he gestured for bubbly (cava) to be brought to him by the dozen. He started pouring from the top. Like magic, it flowed slowly down the contours of the glass, over the rim and down the stem to the next recipient.

I immediately loved Spain. Damn it was different with lots of hidden secrets.

On the way home we thought we had met our match as every five kms there were Guardia in their traditional tricorn hats with long full length cloaks.

They stopped us religiously and enquired if we had been drinking. We said no and then they either waved us on or asked if we had anything like brandy we could give them to keep them warm. It all made sense to me.