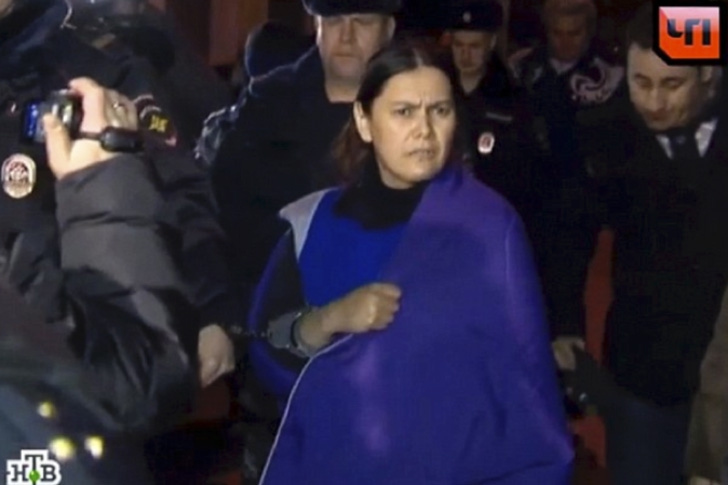 Nanny shows police the scene of the horrific murder.

Gyulchekhra Bobokulova, 38, has admitted to killing and beheading the defenceless youngster in her care then brandishing the head for all to see. New reports have emerged that the nanny had become enraged by her husband taking a second wife back in Uzbekistan. Other claims have been made that she’d found out that a recent boyfriend, she’d met in Moscow, was actually married.

The police escorted the handcuffed nanny – herself a mother of three – to the flat where she murdered the four year girl. Anastasia or Nastya Meshcheryakova, the four year old child, was cared for by the nanny whilst her parents worked and had suffered with learning difficulties since birth. The nanny admitted to strangling the vulnerable victim and proceeded to chop her head off with a kitchen knife before setting the flat alight. The little girl’s remains were left in her cot. Bobokulova also claimed she was haunted by voices which told her to attack the child.

Horrific scenes unfolded yesterday when Bobokulova marched through the street with the child’s head held high, whilst she shouted ‘Allah Akbar’ and ‘I’m a terrorist’.

One witness explained: ‘I realised it wasn’t a wig as I thought initially, but a head – that’s why blood was dripping on her shoes and skirt.

‘I stopped, had a cigarette, tried to get my breath back to normal because I was so shocked.’

Another eyewitness, local student, Alexandra Shuvalova reported: ‘When I got close to the metro, I saw a woman running along the street.

‘I could see that she had hair in her hands or something like that.She was waving this thing and screaming something and drawing some shapes in the air.’

Police sources revealed that the authorities initiallybelieved the nanny to be insane but she has since agreed to help police with their investigation.

The nanny had been working with the family for 18 months and the family had come to trust the nanny. One source stated regarding the child’s mother: ‘She trusted Gyulchekhra fully. More than this she considered her family member. Everyone called her just Gulya.

If deemed mentally fit enough to stand trial the nanny will face 20 years in jail.