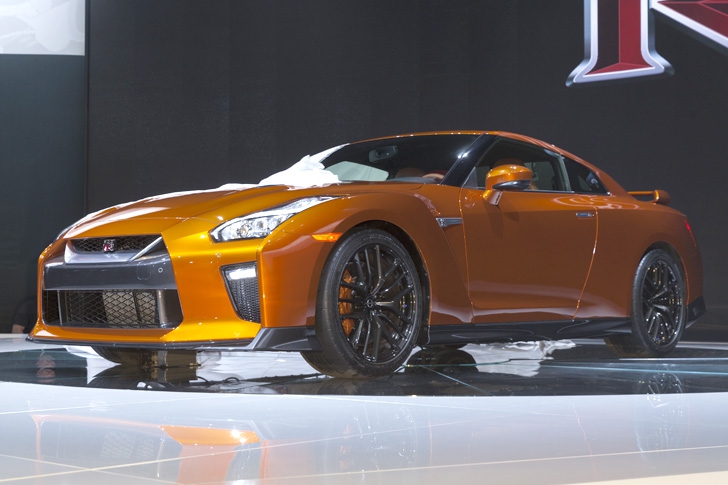 NISSAN GT-R: Most important overhaul since 2007.

THE Nissan GT-R model has been making waves for nine eventful years that have seen plenty tweaks send its rivals into a tailspin.

On March 23 at the New York Motor Show, the Japanese brand debuted its new 2017 model which has been described as the most important overhaul since 2007.

It could be the last update to the legendary GT-R before the manufacturer moves onto pastures new, and they’ve gone all out with a revamped VR38DETT 3.8 litre engine that boasts a power boost increase from 404kW to 419kW and a torque increase from 628Nm to 632Nm.

The new ‘V-motion’ grille has a chrome-matt finish and is symbolic of Nissan’s creative signature design, while the new hood has been heavily reinforced to increase high-speed driving stability.

Air flow has been improved with new bodywork, with a variety of key aesthetic changes providing a sportier design on a more aerodynamically efficient vehicle.

“The new GT-R delivers a heart-pounding driving experience at all times and on any road for whoever sits in the driver’s seat. We have continued to push its performance boundaries to the outer limits—it’s even more potent than before.

“At the same time, more refinement has been added to take the entire driving experience to an entirely new level. We’re proud to bring you what we feel is the ultimate GT that possesses amazing performance, newfound civility and a rich racing history,” Hiroshi Tamura, the Chief Product Specialist of the GT-R, said.

The interior has been artfully redesigned to provide an environment geared more towards the driver’s unique special needs while providing an increased sense of stability for front- seat passengers. High quality leather, integrated navigation and an enlarged eight-inch touch-panel monitor combine with a new display command control to achieve maximum comfort and easy operation.

By mounting shift paddles to the new steering wheel, the design permits drivers to switch gears mid-turn without removing their hands from the wheel, while the paddles boast far better sound and an enhanced feel compared to previous models.

The MY17 Nissan GT-R will be available for pre-orders in Europe from April with the first deliveries scheduled in summer.