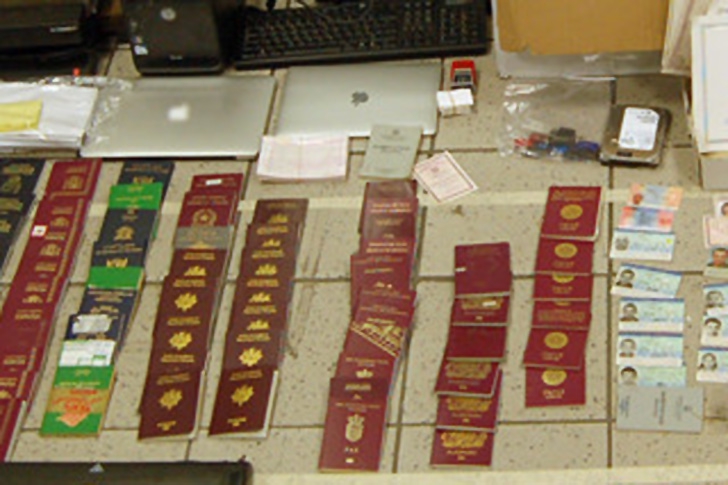 With the support of Europol, 16 persons suspected of forgery of documents on a large scale and the smuggling of irregular migrants have been arrested in Greece, and 3 in the Czech Republic.

These two parallel investigations supported and coordinated by Europol targeted a network of organised crime groups involved in the massive production and distribution of falsified or forged documents (passports, ID cards, visas) to third country nationals. Such documents were shipped through courier companies to EU Member States and other countries in Africa, the Middle East and Asia.

The forged documents were subsequently provided to irregular migrants to enter the EU or to legalise their stays there.

The investigation in Greece highlighted the structure and the hierarchy of the Athens-based network, which was composed of 2 distinct criminal groups operating in parallel, creating this way a sophisticated network of illegal facilitation of irregular migration. The first one was composed of Bangladeshi nationals (‘Criminal Group A’) and the second one of Sudanese nationals (‘Criminal Group B’). Investigations revealed that the Criminal Group A sent via courier services at least 126 parcels containing travel documents, and Criminal Group B 431 parcels over the course of the last year only.

The fees for the forged documents ranged from EUR 100 to EUR 3 000 per piece depending on the quality, type and country of issue. The documents forged by these two criminal groups included passports, national ID cards, Schengen visas, driving licences, asylum seeker’s registration cards and residence permits.

In parallel with the activity of these two criminal groups, the Czech Police began investigating in November 2014 another group that was purchasing in the Czech Republic stolen or lost identity/travel documents, before sending them to Greece to have them altered by the Athens-based criminal groups. The final products were then shipped back to the Czech Republic and distributed through courier companies to potential customers from third countries. This Czech organised crime group also produced fake Schengen visas. It was information provided by the Czech authorities to Europol will allowed for the further identification of the two criminal groups in Greece.

During the action day in Greece which took place on 25 May, Europol deployed a mobile office to Athens to assist the Hellenic Police with on-the-spot intelligence analysis. Throughout the investigation, Europol facilitated the exchange of intelligence, hosted several operational meetings and provided tailored analytical support to the investigation which has already allowed for the identification of new international links leading to Italy, Spain and Austria.

Rob Wainwright, Europol Director, said: “In the last two years we have seen criminal gangs increasingly investing more in the production of fake documents to support a growing criminal market associated with the migrant crisis. Document fraud is now a highly important enabler of organised crime operated by groups involved in stealing or producing counterfeit passports and other travel documents. This operation shows our shared determination in Europe to investigate and disrupt those criminals involved in this illegal activity.”

This case exemplifies the importance of Europol as an intelligence provider and its capability in detecting connections between seemingly unconnected cases. During this investigation, 19 EU Member States and US Immigration and Customs Enforcement assisted the lead investigators.