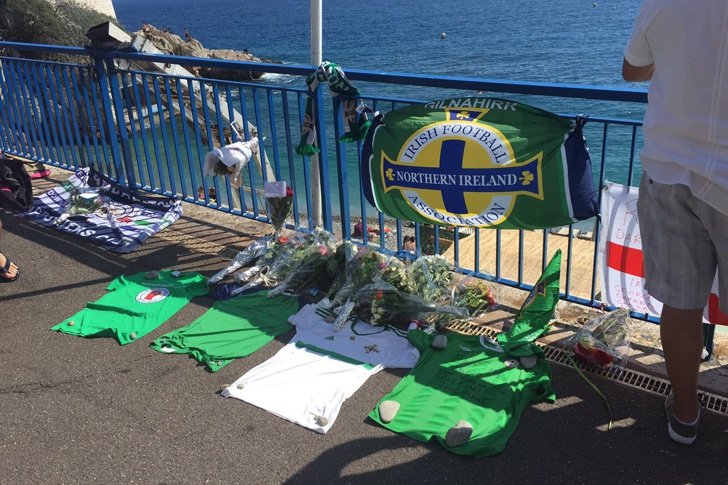 Tributes laid by Northern Irish fans near the site of the accident.

A Northern Irish football fan who died in hospital after plummeting from a beachfront promenade in Nice has been named Darren Rodgers from Ballymena, Co Anterim.

He is said to have been alone in the early hours of Monday June 13 when he fell over a railing and plunged around eight metres onto a rocky section of the city’s Castell Plage beach.

The 25-year-old amateur football player was in the Cote d’Azur capital for Northern Ireland’s opening Euro 2016 tie against Poland, is reported to have been drinking before the accident.

A spokesman for French police said: “It seems it was drink. He was walking and went over the barrier. Because he was drinking he crossed the barrier and fell eight metres.”

Nice’s 5km Promenade des Anglais is a popular walking and cycling route, and was crowded with supporters after they returned from the match on the city outskirts, with many congregating in Place Massena in the old part of the town.

Northern Ireland’s First Minister Arlene Foster and Deputy First Minister Martin McGuinness released a joint statement which read: “It was with great shock and sadness we learned this morning of the death of Darren Rodgers in Nice last night as the result of a tragic accident.

“The loss of a young life in these circumstances is truly heartbreaking and our thoughts and prayers are with his friends and family at this extremely difficult time. This sad news is in stark contrast to the jovial carnival atmosphere just hours before at the [Northern Ireland] game against Poland. Our fans have been fine ambassadors for the place we all call home and we encourage everyone to keep safe.”

“The thoughts of everyone at the Association are with his family and friends at this time.”

A number of Northern Irish players tweeted their condolences, and the team will wear black armbands in their next game against Ukraine on Thursday evening.

Republic of Ireland fans also displayed solidarity with a round of applause in the 24th minute of their game against Sweden on Monday afternoon.

A brief statement from Mr Rodger’s family thanked the public for their support and requested total privacy.