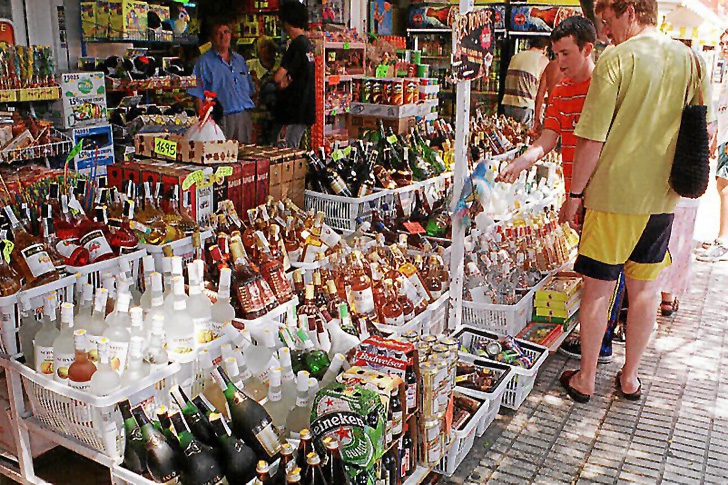 DRINK RESPONSIBLY: The mantra being repeated by Calvia council that is unlikely to be repeated by many of Magaluf’s party-mad tourists as they begin another brutal round of vodka pong.

MAGALUF is continuing its ‘poco a poco’ clampdown on binge drinking and general ribaldry, with supermarkets and other shops in the renowned resort set to be banned from placing enormous displays of the hard stuff in prominent places.

Many of the well-known watering place’s establishments currently fill their shop counters with booze, with some even installing trolley-loads of liquor directly on the street, thus facilitating the sale of alcohol to hammered holidaymakers.

The local council is now eager to polish up their town’s salacious image, with the council voting to approve a motion by the centre-left party Ciudadanos (C’s) regarding the way in which strong booze is presented to young out-of-towners who travel to Magaluf with the sole intention of getting sozzled for the duration of their stay.

C’s spokesman, Carlos Tarancon, said that the sale of alcohol must be regulated “in such a way that traders are not harmed, but that does not permit the sale of the image of alcohol tourism and boorishness against which we are fighting today.”

Shops will apparently be allowed to have some bottles on display, but must mix other products amongst the grog, since to “regulate and limit the display of alcoholic beverages will help to combat binge-drinking tourism, it is a measure designed to limit rather than encourage consumption,” confirmed Tarancon.

The move comes after an 18-year-old English lad almost died earlier this year, following a hare-brained attempt to down 75 shots during a nutsy night out, culminating in him collapsing and having to spend eight hours on a drip at a local hospital.

Regrettably, this was by no means an isolated incident, but the council are determined to improve the situation, having already made changes to several laws regarding the public consumption and night-time sale of drink to tourists, while police are now able to spot-fine rowdy revellers for making too much noise, removing their shirts away from the beach, or leaping from hotel balconies into swimming pools.