Are we living the Tower Of Babel story? 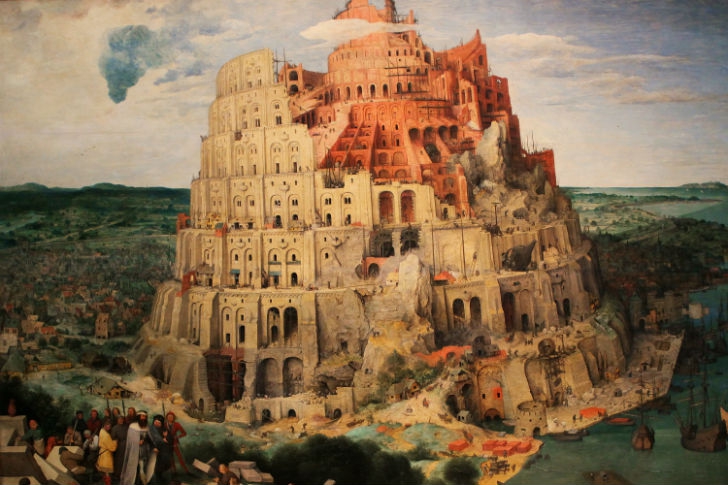 BIBLE STORIES: The Tower of Babel by Pieter Brueghel the Elder

NEARLY every civilisation has a great flood story and lately once fabled cities have been found to actually exist, under the very waters of those great floods.

So if that’s true, what other seemingly fantastic stories could be born from truth?

Could the earth actually be flat and not round, do aliens exist, is the Queen of England a reptile, are they trying to poison us with chemtrails?

Personally I don’t think so, but I do know I don’t ‘know’ the answer. Would it be so wrong to think that perhaps if there is truth in the bible stories, the one about the Tower of Babel is the one we’re living out today?

Based on current events, would it be so far off to think the deities were worried that all of humanity, united in one land, speaking one language, living to help one another, could pose a serious threat to their authority?

Would it be absurd for those in charge to panic and strike up a plan? It actually sounds quite reasonable to me. A plan of confusion and dissidence with so many variances that we’d never again find common ground or a common goal?

If that were the plan, we’d have to say chapó, job well done, as we certainly have fallen, hook line and sinker in my opinion!

We live in a world where fear predominates for the majority: fear of hunger, fear of banks, fear of losing a job, fear of paying the bills, fear of our children flunking school, fear of not fitting in, fear of speaking out, fear of trusting anything and anyone.

The worst part is that it would seem the plan has worked so well we’re not even aware of the plan; we’re all too frantically rushing through our lives, too busy, too scared, too tired, too detached to even consider ‘the facts.’

We all succumb to the temptation, far too frequently choosing not to look within but seeking blame and retribution by commenting on everyone else, blinded by self-importance, righteousness, jealousy and fear of competition, continually adding fuel to the fire.

We talk about climate change and temperatures rising, but perhaps we’re just getting a little too close to hell for comfort? Even if it were out of self-preservation and necessity, the world we live in today is in shambles, with atrocities worthier of the dark ages, crusades and the holocaust than what we’ve been lead to believe is ‘permissible’ in our ‘modern’ times.

But can anything be done about it? Are we just too busy and too divided to care? I certainly hope not and with this in mind, hope that those of you who also have inquisitive minds and aspire to a better world for ourselves and our future generations will come and join us at the United Nationalities of Marbella Summit April 25. Register through www.rtvmarbellanow.com.