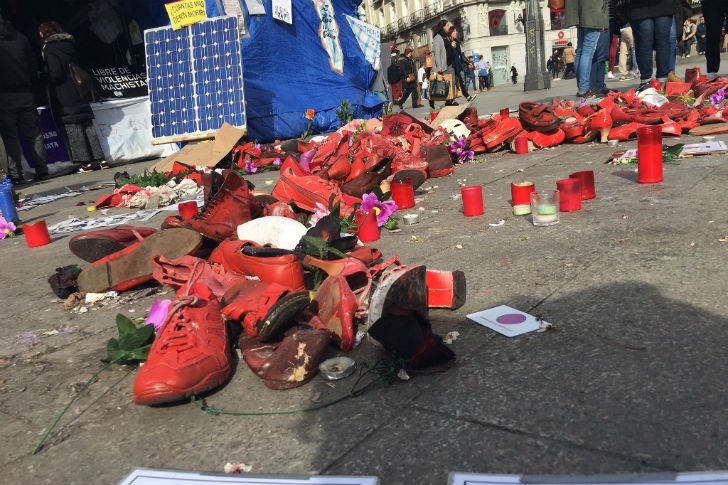 STAMP IT OUT: A Madrid homage to women murdered by their partners.

A HIGH COURT decision to cut the sentence of a Malaga murderer who stabbed his wife 30 times by eight years has sparked outrage.

It comes as the unnamed husband will now serve 17 years instead of 25 after an Andalucian tribunal concluded his actions were “not necessarily” cruel.

Furious women’s rights campaigners have rallied against the move as Women’s Link Worldwide, an international organisation headquartered in Madrid, branded it the worst court ruling of the year in terms of women’s rights.

Marian Gonzalez, the victim’s sister, said: “The recognition that this is a terrible decision gives me and my family new hope and support as we continue to seek justice for my murdered sister.

“Hundreds of people have told the court that it was wrong to issue a reduced sentence, which seems so macho, because stabbing someone 30 times is certainly cruel!”

The husband was convicted of murder with aggravated cruelty in Malaga, but the High Court ruled that the legal idea of cruelty does not conform with the popular conception that it relates to brutality.

In a statement, it said that “hitting someone 30 times involves brutality and fury or blind anger, and, in common language, violence, but it does not necessarily equate to cruelty.

“It is not enough for the perpetrator to repeatedly execute an aggression capable of causing death, it must have been intended to increase the victim’s suffering, nothing more.

“The Women’s Link awards were created to investigate how court decisions can have both positive and negative impacts on female lives, and this year’s best decision gong was given to the Canary Islands Court of Justice after a divorced domestic violence victim won the rights to her dead ex-husband’s pension.

It comes after three women died within 24 hours at the end of last month at the hands of their partners.

Thirty women having been killed in domestic violence incidents across Spain since the turn of the year.