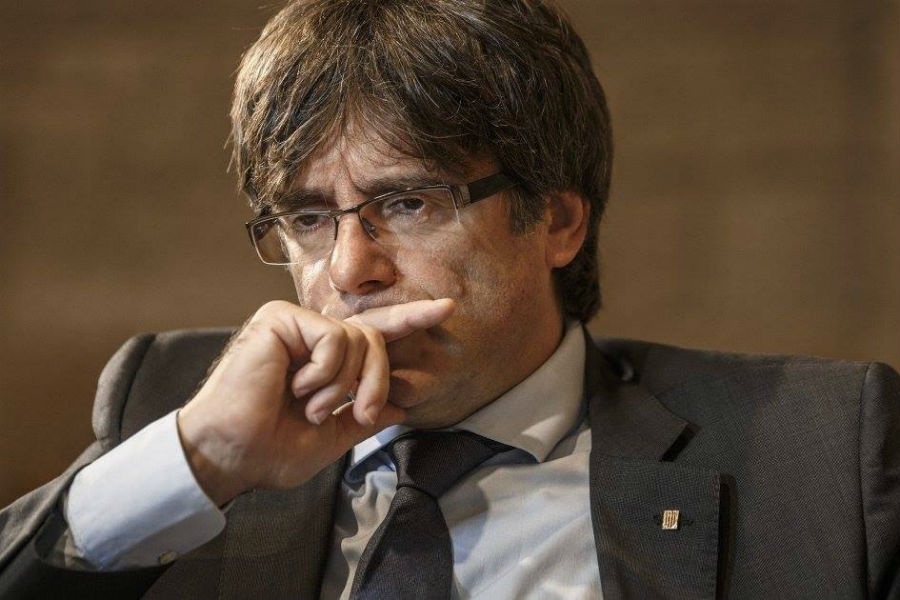 HE’S a bit of a coward is Carles Putzschdemont (someone else’s joke, but too good not to share).

Cataluña’s president Carles Puigdemont chickened out of announcing the Republic on October 10 as his separatist supporters expected.

On the eve of UDI, faced with accusations of treachery, he chickened out of announcing the regional elections that could have halted Article 155 and suspending Cataluña’s autonomous status.

Allegedly pushed by his Juntspel Si coalition partners, ERC, Puigdemont could not chicken out of the October 27 vote proclaiming the Republic to a halfempty parliament chamber and some serious Front Bench faces.

He looked more cheerful the next day going walkabout in Girona, where he was mayor between 2011 and 2016. He smiled for the inevitable selfies and said he would turn up for work as usual on Monday.

Instead he poodled off to Brussels with five members of his government to hire the lawyer Paul Bekaert who has defended members of the Basque terrorist group ETA and halted the extradition to Spain of Natividad Jauregui.

The next day Puigdemont said he would return to face the music, but “only if guaranteed a fair trial,” so until he gets a ‘get-out-of-jail’ free card he will head a government in exile.

UNTIL now Podemos leader Pablo Iglesias ran with the hare and hunted with the hounds regarding Cataluña.

Meanwhile the October Sigma Dos poll puts Unidos Podemos – the not entirely successful Podemos-Izquierda Unida merger – on 15.3 per cent of the vote, now fourth after Ciudadanos on 16.7 per cent.

Having tried to placate voters inside and outside Cataluña until now, Iglesias stayed with the hounds by calling to order Albano Dante Fachin, party leader in Cataluña, after at least one Podemos regional MP voted for independence on October 26.

Whether he likes it or not, that’s where Iglesias must remain if Podemos wants any credibility in Spain’s 16 other regions.

Shortly after he arrived, Sanchez asked to move after he heard a prisoner shout Viva España. The request was rejected as Sanchez’s safety was not at risk, the prison authorities explained.

The trustee assigned to share his cell was luckier. After several days in Sanchez’s company he confessed that he couldn’t put up with the Catalan separatist a day longer.

He was always banging on about independence, he complained: “It was like being sentenced twice over.”

Fortunately he was moved next day but he has our sympathies: we know just how he felt.

THE Catalan crisis could not have come at a better time for Mariano Rajoy and his government.

Little attention has been paid to the Gurtel kickbacks and corruption trial involving leading Partido Popular politicians past and present. The Public Prosecutor maintained that former Health minister Ana Mato benefited, through her exhusband, from presents and commissions bestowed by Gurtel boss Francisco Correa. She read from the usual script, claiming she had no idea who had paid for the nice little extras that the family enjoyed. So someone smart enough to become Health minister wasn’t smart enough to query the origin of such generosity. Or did she merely shrug her shoulders and fasten her seatbelt as she and the kids took off for Disneyland?