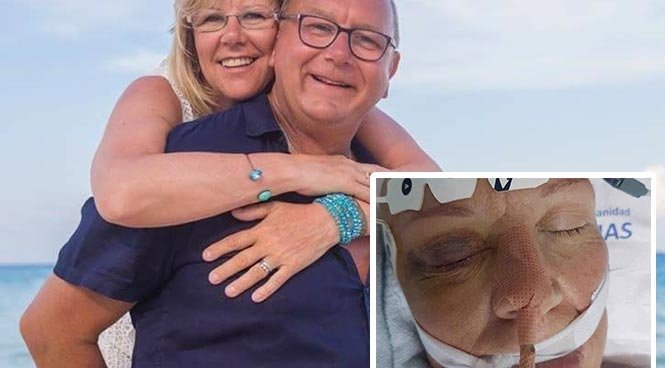 Wendy and Gary and (inset) Wendy in hospital

A BRITISH holidaymaker is battling for her life in a Canary Islands hospital.

Wendy Snelson Brown fell more than three metres after tripping over on a flight of stairs.

The 54-year-old from Runcorn in Cheshire was left unconscious, fractured her skull in several places and broke two lower vertebrae.

She even stopped breathing in the wake of the plunge but was revived by husband Gary, who she married six months ago.

Medics took her to La Palma Hospital, where she was put into an induced coma, before she was transferred to the Hospital Universitario de Canarias in Tenerife for emergency brain surgery due to excessive bleeding.

She remained in intensive care for three weeks and on Monday underwent a second operation on her back, according to reports.

Family friend Joanne McKindley has started a GoFundMe appeal to help the couple – who flew to La Palma on New Year’s Eve for a week’s winter break – when they finally return to the UK, with £2,500 raised so far.

She wrote on the page: “At present we do not know what the future will be for Wendy.

“The extent of her injuries are at present unknown, whatever the outlook may be Wendy’s current home will not be an option for her.

“Wendy will have to move into a more suitable home to begin her long road to recovery.

“As for work we just don’t know when or if Wendy will return.”

Gary added in a comment: “Thank you all so much for the kind donations, it will help Wendy through the dark rehabilitation process ahead.

“Your positive comments and generosity has helped me immensely too, during the worst time of my life.

“We’ve got a long way to go, but I know that with you and all of our friends and family pulling together it will allow Wendy the best fighting chance on her road to recovery.”