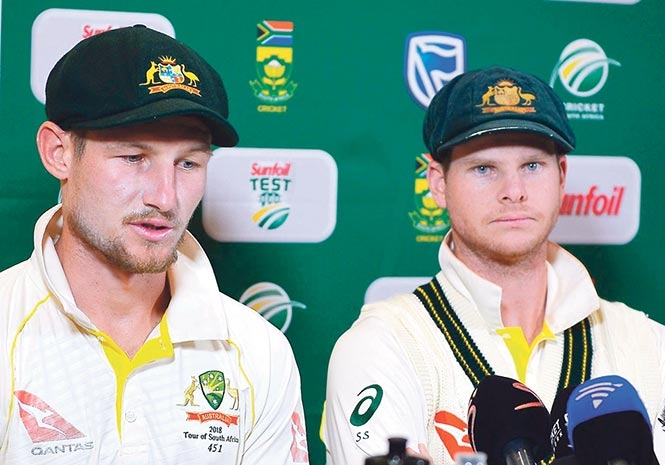 ‘CRYING BECAUSE THEY GOT CAUGHT’: Australian cricketers Cameron Bancroft (left) and Steve Smith face the media in the wake of the ball-tampering scandal.

Had their underhanded, unsporting actions gone undetected, they would have been splashed across the media all butch bronzed and beaming – with eager sponsors queuing up to pour even more money into their already over-stuffed coffers. And there’s the rub. These days sport is all about money. Gone are the glorious days of true sportsmen and women who competed against each other out of pure pride and sporting rivalry.

During the amateur days of yore, apart from a couple of countries who used events as propaganda exercises, I can’t recall any accusations of cheating by the competitors or officials. Nowadays they are all at it. Doping, drugging, betting and game throwing are now regular features on the back pages of the nationals. Hardly any corner of the sporting world has not been infected by this greedy virus that leads to the ‘win at any cost’ attitude that prevails among the athletes of today.

And you know what really sticks in my craw. Sooner or later they all seem to wheedle their way back in.  Even those who commit, what are to my mind unforgivable offences, are, after the authorities have considered their wrists have been slapped hard enough, allowed back in to carry on as though nothing has happened!

Well, if I had my way, this unsporting bunch of arrogant manipulators would never be allowed to partake in any sporting event again. I also think they should be heavily fined and stripped of all past medals and winner’s awards. After all, who knows how long they have been at it? We must bear in mind, that they have also been cheating the public. When sports fans indulge in these events we like to think that everyone involved is competing against each other in an equally fair and legal manner, otherwise what’s the point?

No, they can cry all they like. If it comes on top, they should all get the chop.  Don’t lie and cheat if you can’t take the heat! That’s my opinion anyway. After all it’s just not cricket is it cobber?

Another pair of wailers this week were the despicable duo who were dubbed ‘the Beatles’ (I bet that pleased Paul and Ringo!), by their equally despicable Daesh leaders after they were quite rightly relieved of their UK citizenship.

‘We don’t belong anywhere’ they simpered. ‘We won’t get a fair trial.

‘Who’s going to campaign for us.’ What?! ‘Our Mums won’t know where we are,’ they drivelled on. You really couldn’t make it up. Perhaps they should have thought of these things when they were sawing off the heads of journalists or torturing and crucifying innocent aid workers. I wonder what sort of a fair trial those poor victims got? Not a lot I’ll be bound.