Shirley Valentine chasing The Governess anyone? 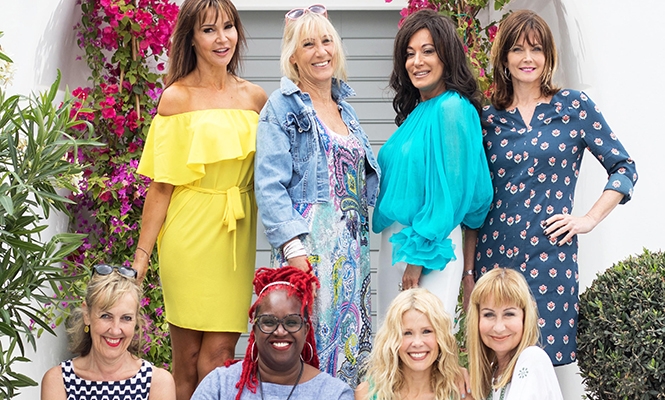 A GAGGLE OF CELEBS? Our Shirley Valentine Summer.

ANYONE who has Love Island withdrawal syndrome, yes, it is a thing apparently, might want to give Our Shirley Valentine Summer, ITV, Thursday & ITV Hub, a look.

For the rest of us, it is worth a look anyway. It is billed as a reality show where a bunch of women celebrities (a gaggle, maybe?) are transported to a remote foreign villa in search of fun, sun and maybe romance. I mean Wall, possible romance, whatever next?

Now, unlike some of the reality shows we chomp through together each week, you will actually recognise most of the celebrities. Among others, Melinda Messenger is there, Sian Lloyd (helping with the weather) and Ingrid Tarrant. The ladies are all looking to make a fresh start or to change something. There is a marriage breakdown, a need to find love, low self-confidence and a longing to find a new hobby – thankfully these don’t all relate to the same person and while I’m not entirely sure longing to take up Scottish Country Dancing quite falls into the same category as trying to get over a marriage break up, the show does seem to work.

I’m not sure what’s in the Naxos water, but they seem to breed the locals handsome on the Island. A girlfriend of mine needed a lie down in a dark room after last week’s Greek language trainer and fitness guru made an appearance. Sian did a bit of reflecting, my friend was hitting rewind! This is probably one for the ladies to be honest, with some friends and a massive jug of sangria. Enjoy, just don’t go planning a move to Greece.

If you are in a more musical mood over the next few weeks, BBC4 is leading the Proms coverage from The Royal Albert Hall. Monday saw Ben Gernon conduct the BBC Philharmonic in a concert of Beethoven and Brahms, the composer, not of Grace Brothers fame – although Wendy Richard with a French horn might get the folk standing in the audience going. It was lovely. The second half was a world premiere. Great I thought. The music was by Tansy Davies. Don’t know Tansy, stick with it. Tansy is a contemporary composer. You just lost me. Now don’t get all ‘give new stuff a chance, bringing music to a new audience’ on me. Tansy’s work just doesn’t sit well with Beethoven. Plan ahead via the BBC website for a blast of sounds from London.

Fans of The Chase, ITV, weekdays, and ITV Hub, help me with this please. Regardless of what The Chaser or Brad might say, can it ever be right to take the lower offer? Shelve Brexit, the PM needs a Chequers conference to give us a way forward on this one. And sticking with The Governess (love her) next time The Chaser is really up against the clock in the final chase, watch how Brad noticeably speeds up asking the questions in the last 45 seconds.

My movie choice this week is Kings of Curry, BBC2, Sunday, late. Worth staying up for if you are a bit of a foodie. The plot isn’t taxing. Two chefs, who are brothers, fall out, open competing restaurants on the same street, daughter of one of them attempts a reconciliation for a wedding. Simples.