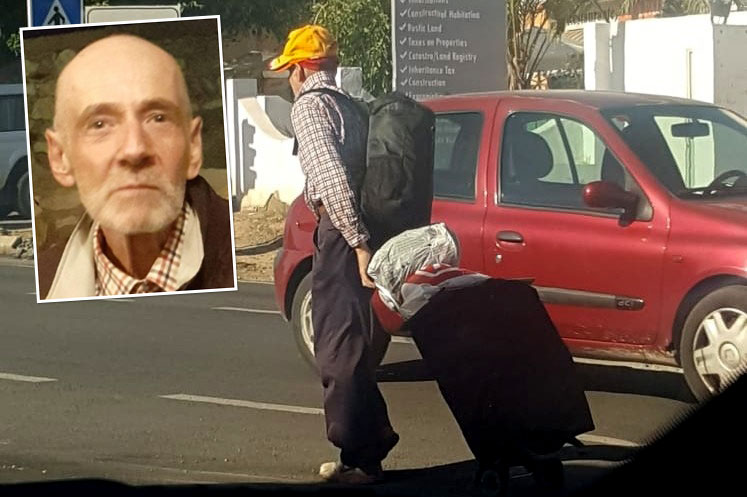 HELP FOR GRAHAM: Find out how you can the elderly, homeless British man get back on his feet in Spain

AN elderly British man, who has covered around 25,000 miles wandering the streets of Spain since losing all his family has been taken under the wing of expats who are trying to help him get off the streets for good.
Rebecca Pattinson told the Euro Weekly News: “I live in Albox and over the past few days a homeless man has come into our area. After getting to know him we have come to realise this poor man gave up on life and became homeless in Spain.
“He has been wondering the streets ever since, moving on from village to village.”
Rebecca said his name is Graham Nobbs.
“He hasn’t worked in around over 20 years as he gave up his job to help look after his mum and siblings. When his family passed away we get the impression he pretty much gave up on life, got in his car one day and ended up in Spain.
“A few years ago the battery on his car went flat and he couldn’t afford to pay for it to be fixed he had to abandon his car the one place he was sleeping and ever since he has been walking the streets of Spain.
“He ended up in Albanchez where a couple came across Graham and took him back to theirs for a shower and some food. They then took him to Lidl where they told him he would make more money and they set up a fundraising page.
“Once my fiancée, David, saw this he thought he can’t just donate money and let him move on to the next village.
Rebecca said, “When David and I began helping Graham he was always very negative about help and after five years it felt like he almost gave up on kindness.
“But within a few days he has really started to see faith in humanity has been restored and he is starting to see that things are hopefully turning for him.
David Langshaw said: “Graham is an incredibly intelligent man, who through one thing or another ended up homeless and he has now been sleeping rough and walking from town to town in Spain for five years!
“He reckons by that he has covered over 25,000 miles over the years.
“He hasn’t been able to claim any of the pension that he is owed as he has no bank account, passport or any means of communication with the pension people back in the UK.”
David recalled how he picked Graham up and took him back to his house and gave him some food, company and a place out of the cold.
But David said Graham then went on his way back to the shop doorway to put his cardboard down and slept under his blanket.
David explained: “I went to bed feeling so bad that I was lay here in my comfy house and nice bed and a 70-year old man was down the street freezing and sleeping rough.
“The next day I went to see him again and had a chat to him.
“We managed to get him somewhere to stay with a retired nurse, Sandie, who is working with him for as long as it takes.
David said: “We want to raise as much money as we can to try and give Graham some hope for the rest of his life and get him set up in a little flat is his own with some home comforts.
“A 70-year old man should not be wandering the streets sleeping rough and having to experience what he goes through day to day.”
Rebecca told the Euro Weekly News today that they have found out that Graham is able to claim his pension but it’s going to take around three months.
“We want to get as much money as we can to help get Graham a passport and NIE. The aim is to get him a little flat of his own and any funds can help go towards getting his house furnished and get him a good start after five years of hell living on the streets.
She also went on to thank Melissa and Ashton Corby who first found Graham. And also Sandie and John that have taken him in.
If you can Help Graham please go to: https://www.gofundme.com/helpforgraham