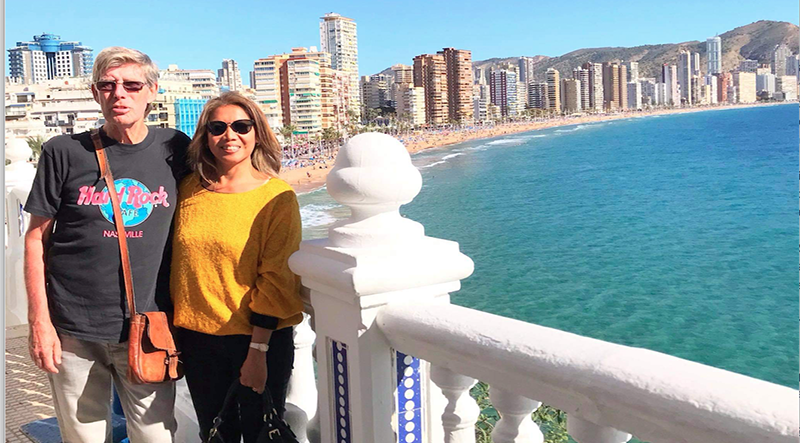 BENIDORM sometimes gets a bad press, but intrigued by a TV documentary Nena Jacques decided to find out for herself…
Oh what a year it has been!
We started it in Palm Beach, Florida and finished it in Benidorm!
Having seen how the other half lives, we thought of seeing the remaining half!
Benidorm gained its reputation from an English TV series, as a cheap and cheerful Spanish resort where the Brits, beer louts and all sorts go for all-inclusive sunshine holidays in Europe.
But earlier this year, we saw a TV documentary by Alex Polizzi featuring Benidorm based on a personal visit and I was truly captivated and intrigued by it as she named it Spectacular Spain!
To celebrate our joint birthdays this time around I suggested to Clive that we go for a “tongue in cheek” celebration and head to Benidorm to see it for ourselves.
Reluctant to agree at first, he eventually succumbed, ready to be disappointed or as he says “ to take it all with a pinch of salt”. Five hours drive later, we had reached our destination!
…And suddenly, we’re in a different Spain, with skyscrapers stretched along miles of seafront – something normally not existing on Spanish coastlines. But it does in Benidorm.
And surprisingly we discovered the summer-time beer louts were replaced by groups doing Tai Chi and open air Yoga on the beach.
There was even a Spanish chorus practicing in one corner of the promenade where every strolling sun-worshippers joined in the enchanting Spanish lyrics.
Clive booked us in a hotel for three nights B and B and each day we just happily sat in the Benidorm Old Town soaking up the glorious sunshine in a lofty square overlooking the whole stretch of Benidorm.
No photo can give justice to this magnificent setting.
And for our birthday celebration finale, we went for a Dinner and Show at the Benidorm Palace where the show could equally be in par with those in Chicago or Las Vegas (sorry no pictures allowed inside the palace and during the show).
Truly spectacular and the service was excellent!
I am so glad we visited Benidorm and had a memorable birthday.
Lots of people call Benidorm the Chicago of Spain or Las Vegas of Spain but in my opinion and personal experience, it is “almost” the Miami of Spain.
I agree with Alex Polizzi, indeed it is truly Splendid!
And oh!…. everyone speaks English in Benidorm, mostly with British accents.
I also strongly suggest not to visit it during the peak of summer.