Fitting way to remember Ian ‘The Legend’ Wadsworth in Mojacar 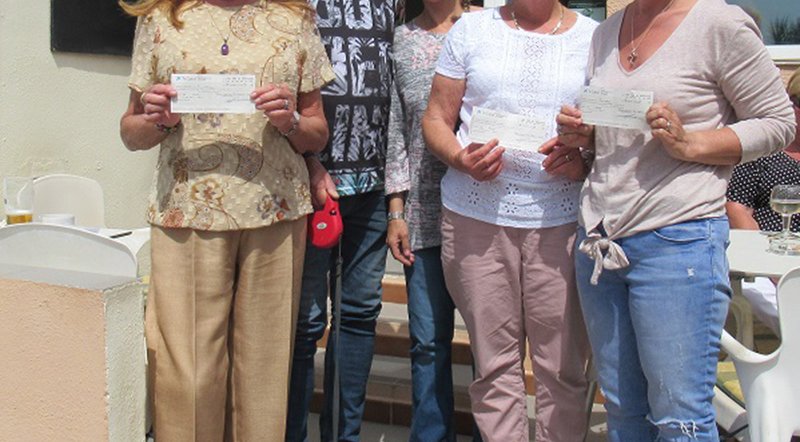 FRIENDS of the late Mojacar character, Ian ‘The Legend’ Wadsworth, came up with a fitting way to remember the “all-round nice guy.”

The talented sign writer, artist, singer and DJ passed away in November at the age of 67. Knowing he was an animal lover and had adopted dog Jack when his previous owner was unable to look after him, Ian’s close mates Andy Perry and Lemon Lounge owner Chris Lowe decided to donate in his name to local animal charities the lion’s share of money raised from selling off his possessions

Last week, Andy presented Chrissie Cremore from PAWS-PATAS, Penny Compton from the Animal Protection Society Albox (APSA), and Tracy Taylor from Helping Animals Almanzora (HAA) each with €400 at a gathering of Ian’s friends.

PAWS-PATAS will put the money towards the charity shelter’s quarantine unit and APSA and HAA will allocate their money to vets’ fees. All three associations are honouring Ian’s memory. Chrissie will put forward ‘Legend’ as a rescue puppy name. The latest male dog to come into HAA’s care has been called Waddy, another of Ian’s nicknames, and APSA will name an area of its shelter after Ian.

Andy also announced €150 would go to each of the two most important children in Ian’s life: Lola Ray, the daughter of a close UK friend, and Taylor, the daughter of Lemon Lounge waitress Kelly Higgs.

Originally from Manchester, Ian ran pubs and worked on cruise ships before moving to Mojacar nine years ago. He made many friends, but left no family behind and very little money, Andy explained.

Sadly he was unable to speak towards the end of his life, but Andy told EWN “he must have been thinking he might not make it”, writing an ‘in the event of my death’ letter.

Ian left instructions to sell such belongings as he had. Andy and Chris also organised an auction of Ian’s artwork, which raised over €500.

Andy and partner Carolyn Duerden dealt with Ian’s service and cremation here, and friends in Manchester raised the money to make-up the shortfall to foot the bill and to fulfill Ian’s last wish for his ashes to be buried alongside his parents near where he was brought up.

Andy said Ian will be greatly missed by everyone who got to know him during his years in Mojacar.

“He was helpful, kind and generous. He’d do anything for anybody, and he didn’t say a bad word about anyone. He contributed a lot to this community.