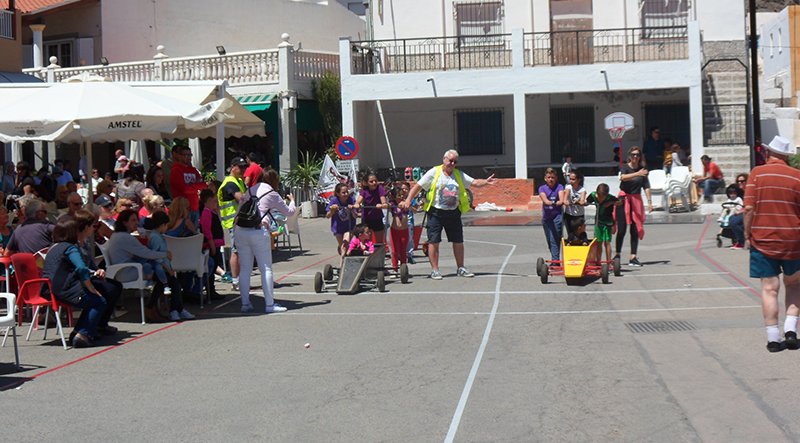 THE latest Wacky Races Villaricos fundraiser was a winner all-round.
The sun shone, the crowds came along, and there was plenty of fun for the fifth edition of the event, this year staged on Saturday April 27.
The organisers reported they were heading for a possible new record total raised of over €1,300, and will shortly announce where the money will be distributed this year.
Events got going with children’s games like egg and spoon and musical chairs, organised by the AMPA parents’ association. This was followed by a spectacular display of hip-hop dancing by the Garrucha dance school team ‘La Ultima Fusion’ led by Natalia Lopez.
The racing began with the younger and then the older children. The annual teachers versus parents ended in a one-metre win for the parents, the opposite of last year.
There were also dancing displays from ‘A Contratiempo’ flamenco school and Villaricos village’s own Pena Fantasia.
Music was skilfully provided by Bill & Mason, a new DJ team following the sad death at the end of last year of Wacky Races stalwart DJ, Ian the Legend.
There were volunteers to help from the UK and as far away as Sweden, as well as locals who arranged track markings, road closures and equipment storage and helped to clear up afterwards.
The organisers are delighted the efforts put in by the team and all those who supported the event made the Wacky Races such a memorable day for audience and participants alike. They also issued thanks for the support from sponsors and those who donated raffle prizes.
Winning numbers for the raffle are held at Bar La Plaza in Villaricos and prizes can be claimed there from Mark.
The organisers are looking for extra hands for next year. Anyone interested should contact Ian Watson on 634 368 243.