A winner at last 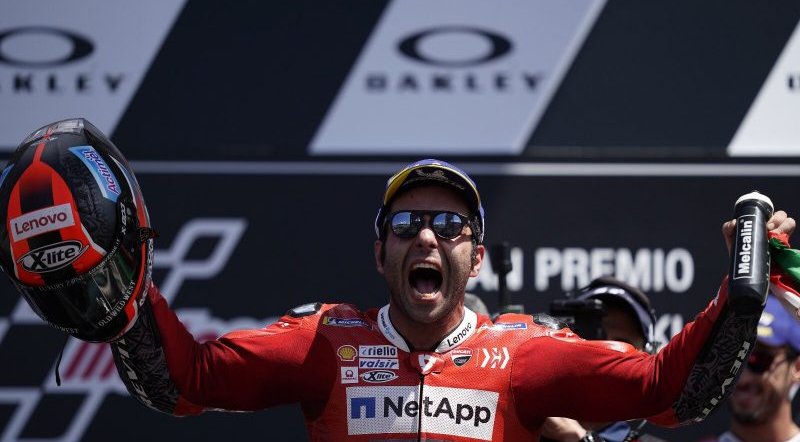 DANILO PETRUCCI – so often the nearly man – has finally won and he couldn’t have chosen a better venue then his home Italian MotoGP.

Now in his eighth season of GP racing, the Italian rode his Ducati to victory, fending off Spaniard Marc Marquez in a thrilling final lap to take the chequered flag by 0.043 of a second. Andrea Dovizioso on the second Ducati came in third just behind the Honda rider, with  Alex Rins fourth on a Suzuki.

In an exciting start several riders made big improvements on their grid positions.   Britain’s Cal Crutchlow stormed off the line and into second from sixth while Andrea Doviziosowent from ninth to third. Alex Rins also had a phenomenal start andclimbed seven positions by the end of the opening lap.

There was plenty of actyion in the early stages – a bit too much for home favpurite Valentinp Rossi. He had made a good start oafter disasterpus qualifying, but on turn four he tangled with Joan Mir and re-joined in last position after running across the gravel.

There was no coming back on lap eight when he crashed at high speed to finish what he himself described as his worst ever Italian MotoGP.

At the front there was plenty of action as Rins and Dovizioso took the front, with Marquez dropping down the order before fighting back. Crutchlow also found himself being overtaken, to finish an eventual eighth.

Going into the last lap Dovizioso got ahead of Marquez at turn one but ran wide, leaving the door open for Danilo Petrucci to roar through into the lead.

Into the final corner Marquez closed rapidly, but Petrucci held on for his first ever win.Speaking after the race Petrucci said: “It’s amazing. It’s unbelievable. At the beginning of this season I start to think maybe I never will (win) but then I adapt this strategy of making the best off-track, on-track without thinking about anything. I have no contract for next year, so I started to think about doing other things in my life.”

Team mate Dovizioso said: “Danilo was fast, he was able to stay at the front and do the same lap times as me and Marc.

“I didn’t put myself in a bad position; I was managing the tyre, I didn’t push too hard and I did the right overtakes in the right moment.

“I’m so disappointed to lose the points here today, but I decide to work with Danilo because I saw some potential. He had to change just a few things and he’s done it, that’s why he won today. He needed that result for the future, so I’m happy for him.”

The teams now head to Barcelona for the next round of the championship.