So much choice with the Jaguar E-Pace 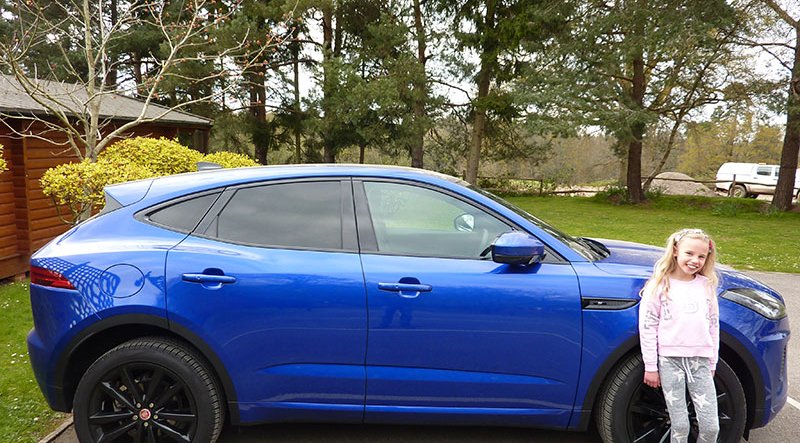 Jaguar E Pace with Harriett. Watch the video at www.testdrives.biz.

THERE are three ways to drive the Jaguar E-Pace. As a manual, an automatic or with paddle shifts. So much choice should ensure that the driver never gets bored.

The E-Pace is the F-Pace’s smaller brother. And as with young siblings, I speak with experience, they have to be watched or they get out of hand. And so it is with the chunky 180 Diesel R-Dynamic S Automatic AWD that I am driving.

The motorway is full of speed cameras and police patrol cars. Fortunately, the E-Pace is fitted with both a speed limiter and a cruise control. But as I soon discover the cruise control is not the best system because although the speed might be set at 70mph, go downhill and it’ll exceed it so concentration on that speedometer is paramount. The head-up display that digitally appears above the dashboard in front of the driver helps in this regards.

The raised height of this SUV is helpful too, because it gives a good view of the road ahead and certainly helps me spot a mobile speed camera van above the motorway some distance ahead. Is this pre-Brexit country in such a state that the enjoyment of driving must be removed along with everything else? While I’m at it, it always ceases to amaze me how when there’s say a 50mph speed limit, that so many motorists completely ignore it.

Inside the cabin, my wife has changed the radio station from calming classical to something more funky, which doesn’t help the calm driving atmosphere that I try to foster. Three little urchins in the back all asking questions and the police at every turn is a sure way of driving me ever so slightly mad. But we make our way slowly but surely to a little village called Pease Pottage in West Sussex.

At first I thought I wasn’t going to get on with the sat nav but son Henry (three) quickly shows me the way round it and I must say I agree with him, it is quite easy. In fact it’s a God send, allowing me to almost relax during our travels. I find that I can rely upon it, which is a rarity often only reserved for my wife’s map reading skills.

The leather seats are fine but the quantity of plastic in the cabin is not what I would expect from a Jaguar. I know this is more of a budget vehicle, but incorporating some wood would in my opinion make for a more special vehicle – which is what a Jaguar always used to be.

On touching the black grille, which does make an impact, I discover it is plastic. I don’t know how much a chrome grille would cost in comparison but in the overall scheme of things surely a boring accountant can acknowledge that aesthetically one is far more striking and characterful than the other. But perhaps younger, more with it motorists aren’t interested in such things, preferring gangster black wheels and grille along with all the bling rappers expect such as the garish Caesium blue finish to the £1,550 20-inch gloss black split spoke wheels. 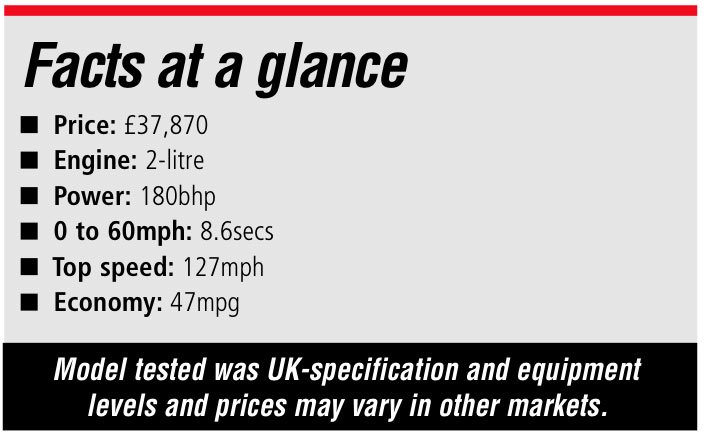 There’s a delayed response from that multi-talented nine-speed gearbox, most noticeable when exiting a roundabout from standstill. I get a similar result when I ask eldest daughter Harriett (eight) what 9 x 8 is… and from me come to think of it.

Kick the accelerator down and it lurches uncomfortably forward. I cannot help but feel that this wide vehicle is better suited to wider foreign roads.

Usually in vehicles fitted with electronic handbrakes there is a separate switch for the parking brake (and there is in the Jag). But the Jaguar incorporates the whole caboodle on its single gear stick, too. Despite this it can still be a time consuming exercise to make the simplest of manoeuvres when compared to a standard manual box. Also the cumbersome nature of this vehicle demands that the driver relies upon the camera when reversing.

Henry enjoys pretending to drive the E-Pace and opening the powered tailgate from the driver’s seat. All these buttons are a child’s delight. In absolute contrast to my Ford Fiesta where he can only turn on the radio and the lights.

Harriett thinks the speed camera alert is clever. I don’t. So many noises going off at the same time just creates a befuddled motorist. A driver must concentrate and read the road. If they can’t do then they shouldn’t be on it. Technology is going too far. But it lives up to its name. The E-Pace is a quick vehicle and reasonably economical, too.