HOT HOT HOT! But the show goes on…. 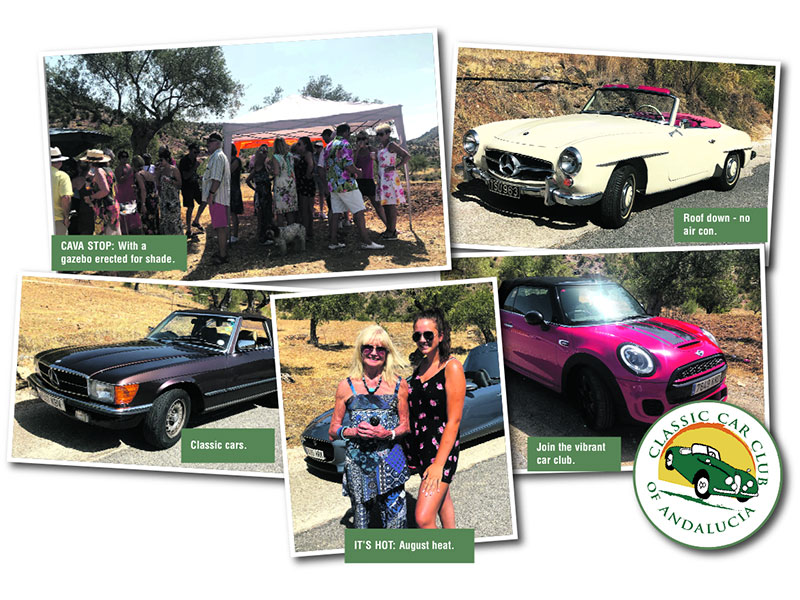 HOT!  indeed it was, when members of the CCCA gathered ready to enjoy their August classic car run. This one ably organised by Trevor Naylor, Martin Hall and Gwen Howe only a week or so ago when temperatures were, again, very high.

The turnout was exceptional. Considering it is August, many people are away and, quite frankly, coming out to explore the Andalucian countryside in these conditions is not for everyone. So the 50 or so members that did show are obviously a hardy bunch and also appreciate the enormous amount of work that goes in to preparing and organising these very special events.

This is also one of those times when bringing out a non-classic car is not frowned upon as regular classics rarely have such essentials as air conditioning. It’s also the one time in this beautiful sun-soaked part of the world when one would prefer to have a convertible roof up and closed to protect from the blistering sun.

It’s amazing how easy it is to succumb to a nasty bout of sunstroke in this weather however used to it one may be.

Unfortunately, a couple of people braved these unforgiving elements and did so get clobbered with sickness from too much exposure to the extreme heat and suns rays. Other than feeling very ill, the bigger penalty was missing the excellent lunch afterwards at Restaurante Palma Nova!

The event started from Venta El Gloria, near La Fresnada to the north west of Malaga and not far from Almogia and the lake there. Whilst crews enjoyed the traditional coffee and bacon sarnis, Carol Giles, Jane Jackson and Marilyn Macpherson made short work of the registration and signing-on process and all were ready for a briefing from El Presidente just after 11.00am.

The organisers set off around five minutes before the briefing to give themselves time to get ahead of the field.  Why would they do that you may ask? Very important, they needed to get to the pre-determined Cava stop, erect a gazebo for shade, and start preparing to dispense refreshments !

As with all CCCA events, navigation is done by Tulip Roadbook. This amazing, simple system was developed for the International Tulip Rallies in Holland in the late 1950s and is a kind of international ‘standard’ now as it needs no words or language and really is very easy to use. However, occasional mistakes are made which can result in a gaggle of cars following one car that has gone wrong. The golden rule preached regularly by organisers is ‘If you go wrong, don’t follow someone else, he may be lost too!’ It happens, and a few cars got caught out as the route headed from north, just below Almogia, to go east and skirt the lake. Amusingly, if the correct ‘slot’ or turn-off was missed, cars would still arrive at the Cava stop but from the wrong direction causing great mirth and bewilderment!   Organisers can be so cruel !

After the first Cava halt the route went over the picturesque Roman bridge to come up through Almogia and head for the Torcal and La Joya. Here there was a long, steep descent from the mountains to Vale de Abdalajis  (quite a mouthful).

Unexpectedly, the Mercedes E-Class convertible of this writer boiled its rather old brake fluid about half way down, and suffered complete brake failure. This wasn’t mentioned to the two relaxed lady passengers so as not to frighten them, but one of them did notice the vigorous pumping of the brake pedal but assumed it was something to do with the driving technique!

Fortunately there was a coffee stop at Venta Los Caballos, not far from the foot of the mountain, where both crews and cars could cool down somewhat.

From the coffee stop the route came back via Guadalhorce, along the new section of the A-355 towards Mijas before turning down the A-7053 towards Entrerrios and along the Mijas Golf road, passing the sad sight of a closed-down Hotel Tamisa Golf, scene of many a superb CCCA party or summer ball. The end of an era for many here on the coast. One wonders what will happen to the place now?

The finish of the event was at the Restaurante Palma Nova on the edge of Mijas Golf course. A super view and ambience and then, in true CCCA style, live music and dancing had been arranged making for something of a great party.

Dining and dancing in that heat, almost 40 degrees. Only the CCCA could pull that off on a hot, very hot, Saturday afternoon!

In September the Club celebrates 11 years of fun and classic cars, wining, dining and motoring. What could be more fun when living in this paradise by the sea?

There will be a party at Treetops Restaurante at El Chaparral on the first Tuesday of that month, and then another classic car run with a superb lunch, live music, dining and dancing to party on at the Safari Rooms in Club La Costa the following Saturday.

Thinking of joining this active and vibrant car club? Do it now and you could be helping to celebrate in September……..

Until the next time,
Ian Giles

Further information on Classic Car Club of Andalucia events can be found on the Club’s website www.cccandalucia.com