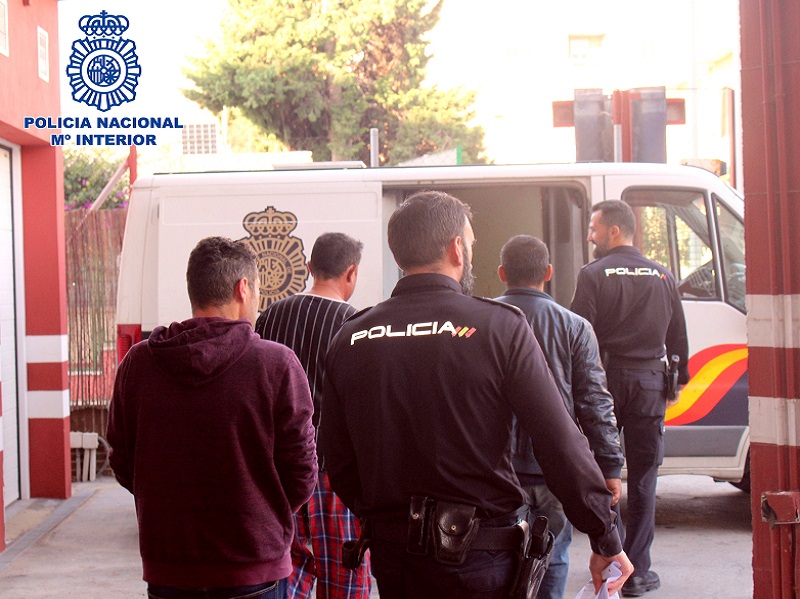 ARMED: One of the men police arrested in October is suspected of holding up a supermarket at gunpoint. CREDIT: Policia Nacional Almeria

ALMERIA police arrested four violent thieves within days of them committing crimes in October.
Police said one of the four men under arrest was charged with stealing a motorhome from a caravan park.
According to the motorhome owner, he was parked up at the mouth of the Andarax river when a man approached and asked him to lower the vehicle window. When the motorhome driver obliged the man suddenly started punching him in the face, managing to take control of the motorhome.
Police recovered the vehicle from a nearby street, detaining the suspect just a few days later.
In a second incident, a man went up behind an elderly woman in Calle Francisco Garcia Gongora in Almeria city and yanked her handbag strap. The would-be mugger was unable to snatch the woman’s bag, but she ended up on the ground and suffered a minor head injury.
The suspect fled the scene, but police officers on patrol in the area caught up with him in an adjacent street and cuffed him.
Crime number three was a hold-up at gunpoint in a provincial capital supermarket. A 50-year old man wearing decorators’ clothes entered the establishment just before closing time and went up to the checkout. He pulled out a gun, forcing the staff to handover the contents of the cash register.
The robber made off down the road, but, police said, thanks to the collaboration of members of the public was arrested at his home two days later.
The fourth detention followed a report from the owner of a car parked in the Joya de Almeria district of the provincial capital they had caught someone trying to break into their vehicle. The victim said when they surprised the thief he had lunged at them with a sharp object. The victim did however managed to get away and escape to their house.
The description of the attacker they gave to police led to the arrest and the return to the owner of the stolen vehicle documents, car radio and sunglasses.
If you have enjoyed this news article, please note that our current charitable activity is on behalf of Ciudad de los Niños orphanage in Malaga.
If you would like to make a small contribution to this cause it would make a great difference to the orphans of Malaga!
Please donate at: https://www.gofundme.com/f/beunited-for-malaga-orphans