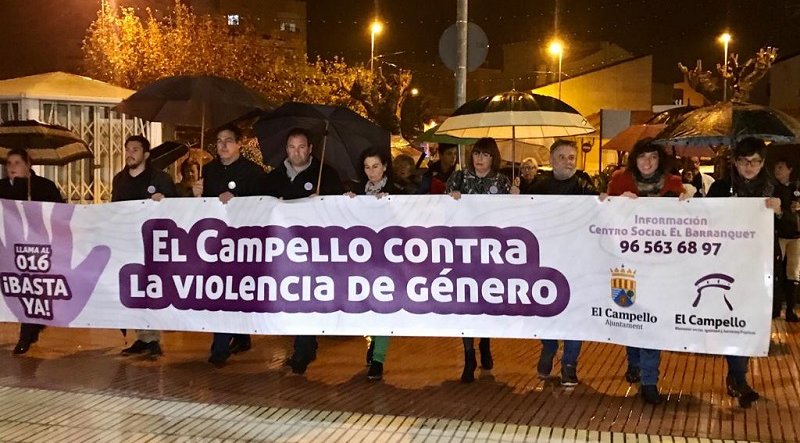 International Day for the Elimination of Violence Against Women

THE MISERABLE weather on Friday night did not stop people coming out onto the streets of El Campello on Friday night to raise their voices against gender-based violence.
In what was possibly one of the first anti-gender violence marches in Spain to mark the International Day for the Elimination of Violence Against Women on Monday November 25, local residents turned out in good numbers to take part in the central event of a packed programme organised by the council’s Equality department.
Local politicians were among the marchers. El Campello acting Mayor Lourdes Lledo was one of those taking part, as were councillors from the Popular Party, Ciudadanos, PSOE, Compromis, Podemos and Esquerra Unida.
The walked from the Town Hall to the Casa de Cultura under the banner, ‘El Campello against gender violence. Enough now’.
When they reached the Casa de Cultura 51 white roses were given out in a simple, but moving act. On each rose there was a purple ribbon with the names of the 51 victims killed this year in Spain by their partners or former partners, which members of the public read out.
Equality councillor Merce Pairo told the marchers, “Today is a grey, rainy day in El Campello, but we have come together to denounce the fateful, dark days which the mortal victims of this scourge suffer, which have to end, and to condemn the injustice just for being a woman.”
She continued, “the most disgusting consequence of machismo is death”, calling on men to collaborate “to definitively eradicate the inequalities from which we all suffer.”