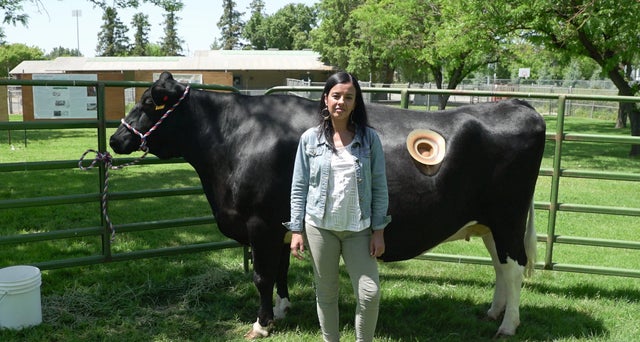 Ethically unsound: Daisy the cow lives with a hole in its side, testing whether seaweed makes it burp less Pic: BBC

LAST night’s BBC’s hard-hitting documentary ‘Meat: A threat to our Planet’ showed poignantly how our hunger for meat is killing our planet.

From colossal farms in America to the destruction of the Amazon, presenter and wildlife biologist Liz Bonnin travelled the world to investigate the extent of the environmental carnage caused by eating meat as well the harrowing truths of factory farming.

The film did not look at the morality of eating animals but told the hard truth about what our animal consumption is doing to the world.

It demonstrated that the global livestock industry is responsible for more greenhouse gas emissions than the running of all the world’s transport combined, and it’s polluting our air, land, and water.

Each one of the 1.5bn cows on Earth heats the planet via methane gas (30 times more powerful than carbon dioxide) as much every year as the CO2 produced by burning 600 litres of petrol

In the Amazon rainforest beef farming is a major cause of deforestation, and Ms Bonnin met a baby harpy eagle, a species rapidly losing its habitat as cattle farmers decimate the forest.

Feeding our planet’s livestock is also leading to huge biodiversity loss and, in South Africa, this is affecting life in our oceans, helping to drive the African penguin towards extinction.

Exploring the solutions, Ms Bonin interviews a  small-scale farmer in Wales who farms ethically. He kills each chicken himself because he believes we would all eat less meat, with more thought.

Some facts from the programme:

Looking at solutions, Ms Bonin met a farmer in Wales who farms ethically on a small scale. He kills each chicken himself because he believes we would all eat less meat, with more thought, if we stopped seeing our meat as just a packaged commodity on the supermarket shelf.

Ms Bonin revealed that since making the programme she has herself cut out red meat and eats less of other meat. But this happened only after witnessing first-hand the harrowing truths of factory farming.

Animal welfare campaigners welcomed the programme. Philip Lymbery, CEO of Compassion in World Farming, said in a blog today: “African penguins are being driven to the edge o extinction, because we’re hoovering up their food from the sea – and there’s little left for them to eat.

“You might think this fish is ending up on our plates, but most of it is being ground down and fed to farm animals – caged and confined in factory farms. As fish is hoovered up from the sea, seabirds are being starved to oblivion.”

He added: “I believe that all animals deserve to feel the joy of living – the fresh air, sunlight on their backs and space to roam. When animals are returned to the land in the right way, in well-managed mixed rotational farms, whole landscapes have the chance to spring to life.

“Helping to revive a living countryside can be as easy as choosing to eat less and better meat, milk and eggs from pasture-fed, free-range or organic animals – with a cascade of positive benefits for the environment, wildlife, farm animals, and us.”