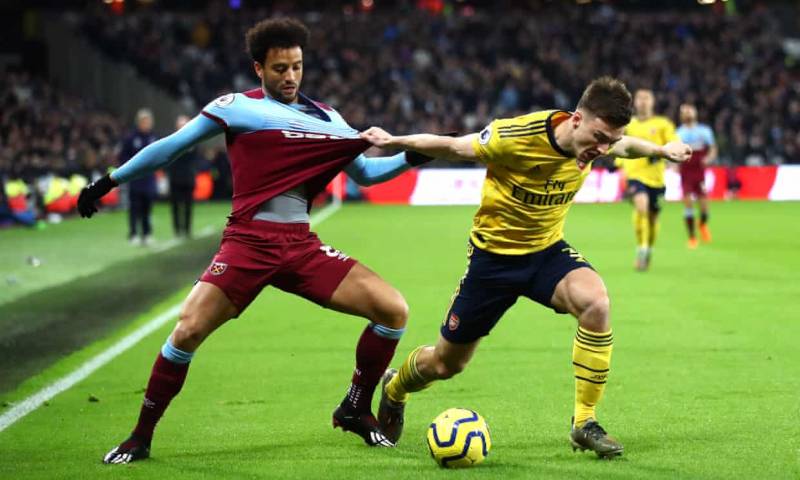 There was a late team change for Arsenal as Hector Bellerin tweaked a hamstring in the warm-up, and he was replaced by Ainsley Maitland-Niles at right-back. Sead Kolasinac took Maitland-Niles’ place on the bench.

The teams came out to a full derby atmosphere at the London Stadium as ” I’m forever bubbles rang out around the ground.

The game saw West Ham spring to life early on, Noble and Anderson drove down the middle and set up Antonio, who lashed high over the bar. Then they came again and forced a corner down the right. Torreira was smacked upside the head and it was a free kick, though Cresswell took a shot anyway and he hit the post.

It was all West Ham mainly in the first half as Arsenal looked out of salts and on the 38th minute West Ham struck the first goal of the game when Cresswell won a corner down the left. He knocked  it long. Rice flicked the ball towards Fornals, to the right of the six-yard box. He dinked it back in the box – Ogbonna wanted it the most, and his desire won out. His header, towards the top left, twanged off Maitland-Niles’ back and into the top right, past the wrong-footed goal keeper Leno.

VAR once again raised it’s ugly head and it was preposterous. VAR took nearly two minutes to work out whether Ogbonna had headed the ball onto his outstretched fist, en route to the goal via Maitland-Niles’ back. It was nowhere near, but it took them about 200 replays to decide.

West Ham pressed for a second goal but just they just couldn’t get it, but trotted off down the tunnel looking fairly content at half time They’re 45 minutes away from a confidence-restoring win. Arsenal by contrast look miserable.

With Arsenal doing nothing first half  they suddenly sprung into life in the second Torreira slipped a pass down the left for Kolasinac to stride onto. Kolasinac entered the box and pulled back for Martinelli, the young man slammed a glorious first-time shot into the bottom right to bring Arsenal level.

Nearly straight after on the 66th minute  with Arsenal being a complete shambles less than ten minutes before. they took  the lead, and scored a magical goal. Aubameyang slipped a pass wide right for Pepe, who shuffled into the box, making a little bit of space away from Masuaku, and curled an unstoppable shot across keeper Martin and into the top left! The keeper had absolutely no chance with the shot and Arsenal were into the lead from nowhere.

The scoring wasn’t over – just 3 minutes later – Aubameyang back heeled a pass down the right, releasing Pepe into a little bit of space. Pepe checked and chipped a delicate cross back towards the striker, who had kept moving. Aubameyang bicycle kicked into the bottom right, keeper Martin got a hand on the shot, but couldn’t keep it out. 1-3 Arsenal.

Arsenal had turned it right round to burst West Ham’s bubble.