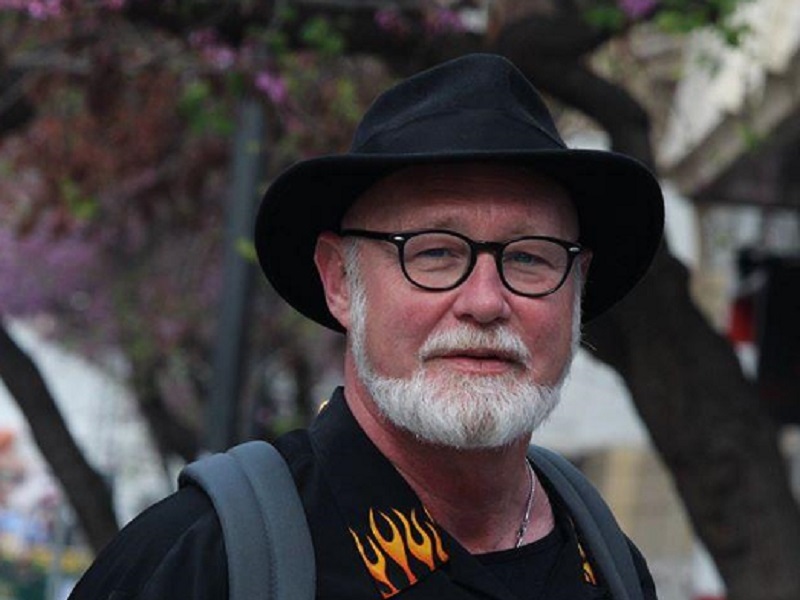 INSTINCT: Phillip circled round the group on his bike yelling “These are hugger muggers! They're trying to rob me! La la la la la!” CREDIT: Susan Bryant

EX-PATS up and down the Spanish Mediterranean coast have fallen victims to so-called ‘hugger muggers’, but one gang of thieves met their match on the Costa Blanca when they targeted Texan expat Phillip Bryant.
Denia resident Phillip told the Euro Weekly News, he had been cycling home from the shops one day back in the summer and was nearly at the gates to the complex where he lives on Carrer Cigonya when a grey car pulled up beside him.
“The male driver started asking a bunch of questions about directions”, Phillip recalled.
“I tried to help him, but his questions got more and more confusing. Right when I was telling him to go into Denia and ask someone else, I noticed that two females had exited the car and were approaching me from opposite directions.
“I was still on my bike, starting to wonder what’s up, when the females reached me.
“’Would you like to get married?”, the older and taller of the two asked.
“The younger one stroked my chest and said, ‘You are very sexy’.
“The guy had asked directions in Spanish, but they were using English.”
At this point Phillip’s instincts kicked in.
“I saw that the guy was turning the car around, since he was facing a dead end. Somewhere in my brain, all of my alarm bells and warnings went off. I have a good friend who was hug mugged by a group of hookers in Barcelona, and I realised that was the intention of this group.
“Before I consciously knew what I was doing, I pushed off on my bike and started riding in a circle around the women and the car. I’m not sure where it came from, but all of a sudden I was singing and yelling, ‘These are hugger muggers! They’re trying to rob me! La la la la la!’”
Joked Phillip, “Yeah. I sang la la la at them. It’s not a defence I would have predicted I would have employed!”
“’Hey look everyone! These people are thieves and are trying to rob me!’”, Phillip then shouted out for good measure, attracting the attention of people walking towards a nearby beach bar.
“I was a one man band of Apaches and they were in my territory!”
Phillip’s unorthodox defence worked. The woman fled back to the car and jumped in, all three shooting him a dirty look before speeding off.
“After I had time to process what had happened, I was pretty p***** off at them”, the straight talking Texan told EWN.
He was also surprised he had been targeted at all.
As reported a number of times in EWN, ‘distraction’ thieves’ victims on the Spanish costas are often senior citizens, the vulnerable and people with reduced mobility, many of them foreigners.
Phillip pointed out he is neither aged nor infirm, does not he lack mobility and describes himself as on the stout side.
“I resent being mistaken for a victim. I’m also kind of impressed with their boldness”, he remarked.
Phillip has blunt advice.
“What I’d say to other men is most likely you’re not that hot. If strange women walk up to you, start touching and complimenting you, then offer strange and wondrous experiences, tell them to f*** straight off, check to see if you have your wallet, phone, and watch, and make a scene. If they try to take your stuff, hit them straight in the face.”
https://www.euroweeklynews.com/2019/12/15/hugging-muggers-preying-on-ex-pats-arrested-in-calpe-on-costa-blanca/#.XgIuBlVKiUk
https://www.euroweeklynews.com/2019/05/28/organised-muggers-in-spain-preying-on-expats/#.XgIuJVVKiUk
https://www.euroweeklynews.com/2019/07/02/distraction-thieves-target-another-expat-in-los-gallardos-almeria/#.XgIuq1VKiUk