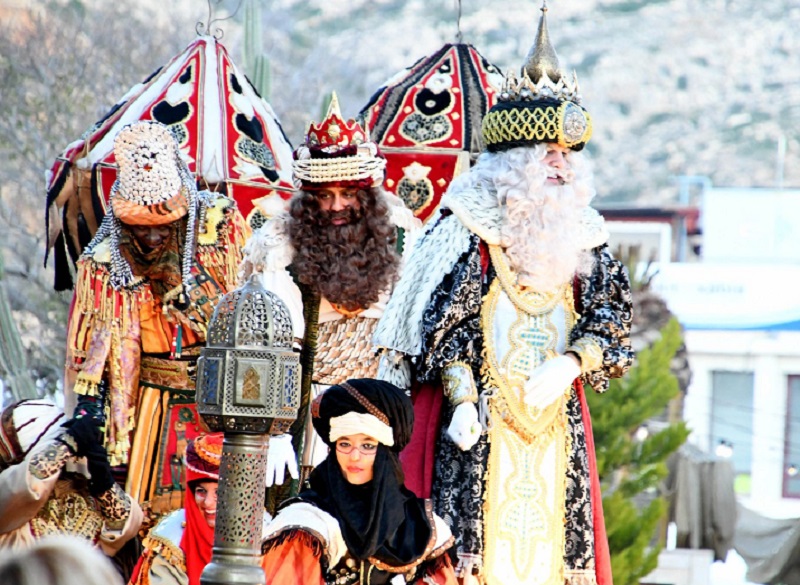 COLOURFUL, exuberant Three Kings’ parades brought final festive season magic to the streets of towns and villages all along the Costa Blanca.
Benidorm put on one of the most elaborate events on Sunday evening, bringing thousands of residents and tourists into the town centre to enjoy the annual tradition celebrated as the Christmas holidays draw to a close.
Some 1,000 people took part in the grand procession through streets packed with eager onlookers of all ages. Heading the parade of all manner of imaginative floats were colourful characters from the worlds of film, television and fairytales. The second half represented the story of the Three Kings’ journey to Bethlehem. The line-up also featured Roman centurions, King Herod and the Christmas star.
Young and old scrambled to scoop up the 4,000 kilos of sweets tossed into the crowds. The Three Kings also gave out 2,000 toys to children who had waited for them in the Plaza de la Navidad.
Benidorm Mayor Toni Perez welcomed the three royal visitors to the town.
“Just like Benidorm makes thousands of people happy, make the people of Benidorm happy, especially those who have suffered the loss of a loved one”, he asked Melchior, Gaspar and Balthazar.
Towns like Denia, El Campello and Javea pulled out all the stops for the Three Kings celebrations this year too. In all three, as in Alicante city, Melchior, Gaspar and Balthazar made their arrivals by sea, adding to the excitement before taking centre stage in processions featuring everything from dancing polar bears to superheroes, and putting a smile on the faces of thousands of youngsters.