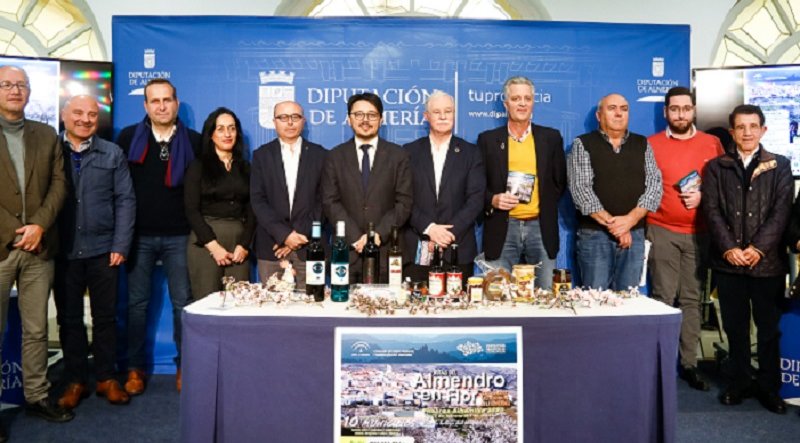 ACTIVE tourism and fine food from inland Almeria come together this month to coincide with the time of year when the almond trees burst into bloom.
Throughout February the provincial government is organising guided Filabres-Alhamilla Almond Routes along with what is the seventh edition of the Almond Gastronomy Days.
The initiative is running every Saturday and Sunday up until March, with routes and lunches in Lubrin, Castro de Filabres, Alcudia de Monteagud, Benizalon, Lucainena de las Torres, Tahal, Senes, Sorbas, Uleila del Campo and Tabernas.
Diputacion de Almeria Culture and Cinema deputy Manuel Guzman revealed that more than 6,000 people have taken part in the initiative since it was first launched and said he hoped this year it would prove to be equally as popular as in the past.
According to Guzman, the routes and gastronomy days are an example of the provincial administration’s policies of taking actions aimed at battling depopulation in interior municipalities.
“This activity impacts on inland tourism and recovers our traditions and way of being, hence it fits in with the purpose of maintaining population”, the deputy affirmed.
The activity organiser Diego Garcia explained the route programme gives participants the opportunity to enjoy not only the natural surroundings and typical cuisine of different parts of Almeria, but also to discover their folklore, crafts and history.
Lucainena de las Torres Mayor and President of the association for inland local councils Juan Herrera pointed particularly to the final route in Tabernas which will have cinema and the history of the Filabres-Alhamilla region as the theme, and which will also feature a demonstration of desert region cooking.
Herrera also emphasized the project was the fruit of 10 local authorities, the provincial government, the Junta de Andalucia and regional producers and restaurants working together “to generate solid and long-lasting tourism proposals.”
The Filabres-Alhamilla area is, he said, “a region which has more than we imagine.
“Projects like this are an opportunity to turn the region around.”
For more information on the routes see the website www.almeriainformacion.com