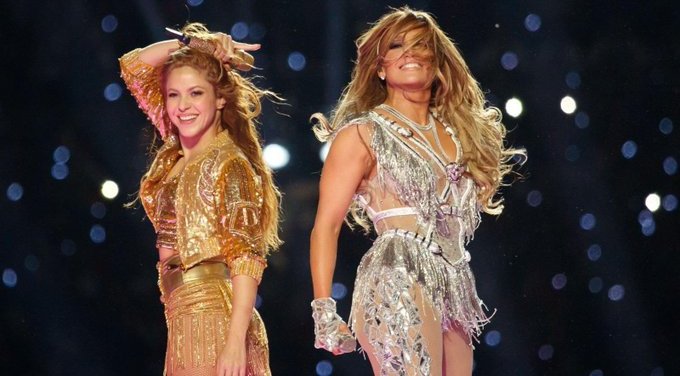 BARCELONA resident Shakira and Jennifer Lopez, who last year performed in Fuengirola, took to the stage to perform during the Pepsi Super Bowl Halftime Show at Hard Rock Stadium on Sunday in Miami.

From pole-dancing moves pulled straight out of Lopez’s new film Hustlers to Shakira’s crowd-surfing and meme-worthy tongue-wagging, the Latina singers brought mountains of energy to their historic performance.

Shakira, 43, whose long-term boyfriend Gerard Pique plays for FC Barcelona, opened the performance with her hit “She Wolf” as part of a set that included chart-topping tracks “Whenever, Wherever” and “Hips Don’t Lie”. In between, she played the electric guitar, crowd-surfed and of course, belly-danced.

J.Lo, 50, joined the performance midway bringing a surge of extra energy. She rocked and pole-danced through a medley of classics including “Jenny from the Block” and “Waiting for Tonight”.

Lopez’s daughter, Emme Muñiz, joined in to lead an all-girls’ choir in a slowed-down version of “Let’s Get Loud” before her mother returned to the stage draped in a feathered cape, picking up the pace for Muñiz to belt out Bruce Springsteen’s “Born in the USA”.

Colombian-born Shakira cheered on the girls as she played the drums. With mother and daughter side-by-side, it was a picture-perfect moment of women’s empowerment as well as a celebration of what opportunity can create: the American dream.

Shakira wrapped with her 2010 official World Cup song, “Waka Waka” before the pair finished together with a powerful finale of Latin-inspired dance moves.