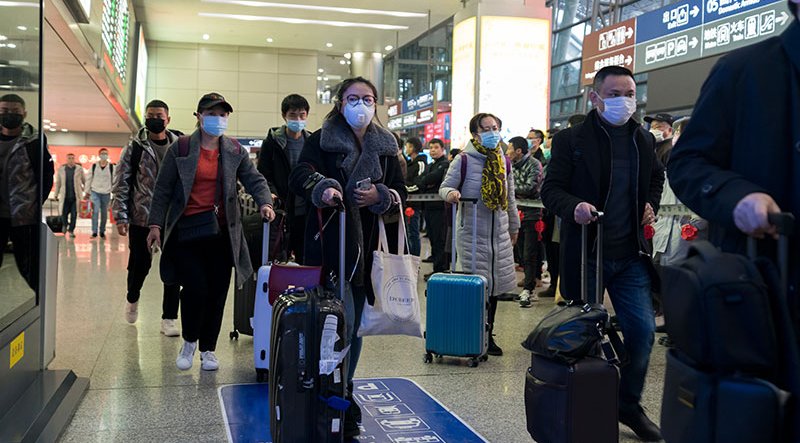 Of course health issues are likely to be a dominant theme of the coming weeks as the Coronavirus continues to build towards a peak.

Trade is affected by quarantines or the threat of them. Governments are powerful and may cause disruption to trade flows so are the cumulative actions of individuals. Business often gets done in person and factories need people to make them operate.

Many companies have already stopped all but vital travel to China. Ships and planes need to be loaded and unloaded. The intricate ballet of world trade is flexible, robust and competitive.

Trade can and does cope with a lot challenges even in ordinary times. Looking at the reactions of the stock markets so far the coronavirus disruption is being priced in. As yet the expectation appears to be that the damage will be relatively light.

However business people are choosing to pause travel plans while they wait for clarity to emerge. Sentiment is on watch rather than on hold.

Closer to home in London; unease is rising concerning the coming trade talks between the EU and the UK. Obvious to point out that the UK has now left the EU.

News and media stories in the UK in the coming months will centre on the  essential lack of fairness of the EU. For example French citizens resident in the UK may continue to vote in local elections in the UK.

That is no longer the situation in France where UK nationals have already been disenfranchised. While the EU is pushing its own sound bite “the level playing field” to characterise fair play on its own terms.

As both sides set out their respective stalls in the coming weeks a narrative is emerging suggesting fairness as the core issue around which public opinion ought to coalesce. While the UK – EU trade talks will take some time to start, officially five or six weeks, the tone is being rapidly set.

It is reported that several of the leading lights in the UK Civil Service are already minded to suggest a “walk away” from the UK- EU trade talks is more likely than acceding to the reported demands of Mr Barnier and the EU.

While Remainers are no more, the UK has left the EU after all, a rump of people one could tag as Re-joiners are already making representations and lobbying. Their idea is to try and make the UK – EU separation so close that re-joining the EU may remain a possibility. Far fetched?

After the last three years of the prolonged Brexit saga; the UK – EU Trade Talks will likely be short and to the point, as well as being probably overshadowed by events elsewhere.

Preparations to deal with disruption to trade is to be redoubled with the expectation that there will indeed be disruption.

Questions were being asked in London’s newspapers over the weekend. Were the Chinese authorities hiding the true extent of the Coronavirus outbreak? Will the ongoing attempts to contain the coronavirus outbreak result in a slow down in trade? Wu Han is ground zero as far as automotive manufacture is concerned in China.

An industry that is highly integrated with complex and long supply chains and to all intents the region is locked down and shut. Chinese factories may not reopen in a timely fashion following the recent Lunar New Year holidays.

Trade Talks and talk about trade are going to prove to be very interesting even for those of us who usually find such matters very opaque and boring.