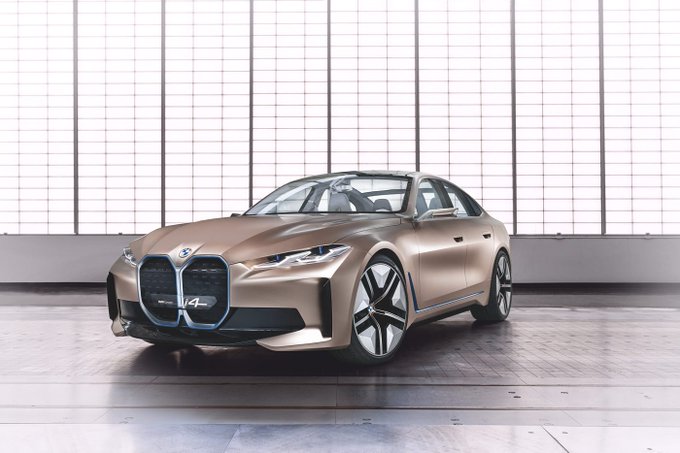 BMW has revealed the Concept i4 an all-electric saloon, which previews the German brand’s forthcoming i4 rival for the Tesla Model 3 that’s due to enter production in 2021.

Underneath, the Concept i4 (and the upcoming production-ready i4) shares its body-in-white with the BMW 4 Series Gran Coupe. A handful of styling tweaks, such as a larger radiator grille, updated headlamps, a tweaked rear end and a range of blue styling elements feature, in a bid to distance this electric saloon from BMW’s conventionally powered line-up.

BMW has also fitted a range of aerodynamically conscious design revisions, such as a set of wide-spoked alloy wheels and blanked-off ducting for the front bumper. The lowered side skirts also conceal the battery pack, while the reworked rear diffuser masks the space that would normally be occupied by an exhaust system.

Inside, there’s a new curved infotainment screen/digital gauge cluster combo, which BMW has confirmed will be used on the upcoming production-ready iNEXT SUV and i4 electric vehicles. The screen controls almost all of the vehicle’s functions, including heating and ventilation, infotainment and navigation.

The i4 features a 523bhp electric motor, which provides a claimed 0–62mph time of four seconds and a top speed of 124mph. The powertrain is fed by an 80kWh battery pack, which provides a maximum claimed range of 373 miles.

The driving qualities of the BMW Concept i4 cannot be expressed in figures alone. The virtually silent delivery of power creates an entirely new sensation of dynamism. “The design of the BMW Concept i4 shows fantastic proportions, a powerfully expressive character and, of course, a lot of attention to detail,” adds Domagoj Dukec, Head of BMW Design.