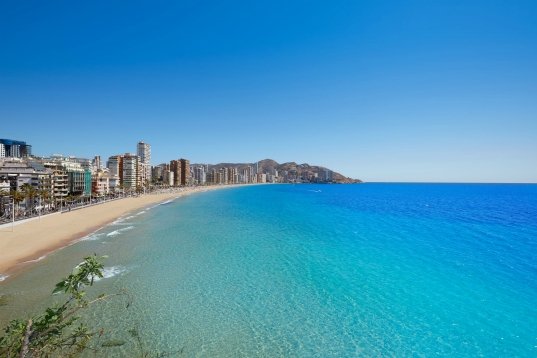 Spain’s holiday resort Benidorm on the Costa Blanca is seeing a boost in bookings as France’s beach restrictions appear to turn off tourists.

BENIDORM, a favourite with British holidaymakers, has seen a spike in bookings in the last few days, with experts claiming the resort is benefitting from French cancellations.
Joanna Mitchell runs a travel agency in the east end of London, and says she has seen a significant shift in the last few days.
“There has definitely been an increase in Benidorm holiday packages this week, Benidorm is leading the way for all Spanish holiday bookings with packages being cancelled in France due to the restrictions.”
France has reopened some beaches to sunbathers, but spaces are fully booked meaning getting a spot in the sun is unlikely.
A beach in southern France was the country’s first to reopen for sunbathing after two months of coronavirus confinement, but places must be booked two days in advance and slots last just three hours.
Sun-worshippers who booked one of 66 coveted spaces for up to six people at the beach in La Grande-Motte found they were cordoned off by ropes and wooden stakes and had to get off the beach after three hours.
Apparently the spaces are fully booked next month.
And in France’s northwest, towns have closed their beaches days after reopening, after too many visitors ignored social distancing rules.
Spain looks likely to be lockdown free by mid-July with airlines back up and running and Benidorm’s much-loved beaches open to the public.
Benidorm Council is still finalising details of how it will reopen its beaches up to the general population, although mayor, Toni Perez has ruled out creating plexiglass cubicles amid concerns over intense heat and a lack of circulating air.
The local authority favours technology as the way forward, with Perez hinting it will play a big part in making sure social distancing is respected.
He has received plenty of public support in his bid to move through de-escalation process phase by phase, provided appropriate measures are in place.
This week he demanded answers and transparency after the Valencia Community’s Ministry of Health announced it would not request the region move into Phase 2, despite “the hospitality industry being prepared.”