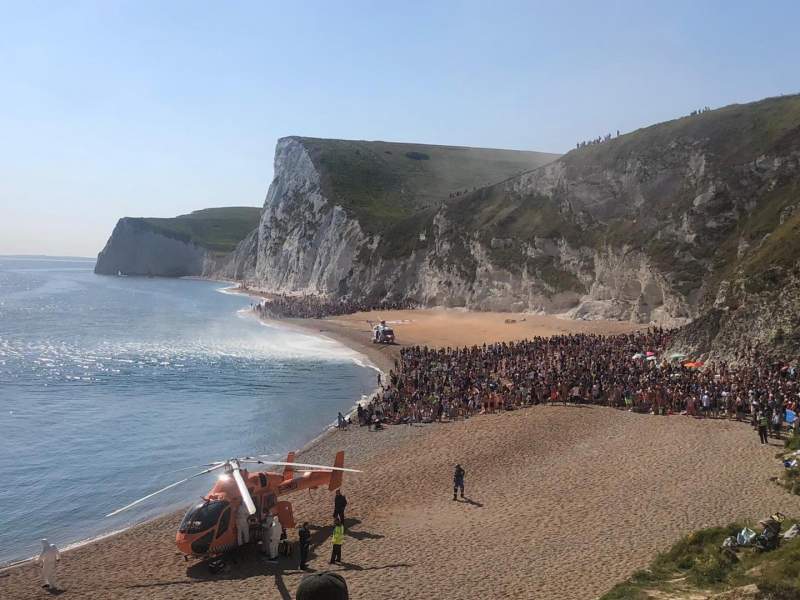 At least three people sustained serious injuries yesterday as a result of 'tombstoning' at Durdle Door Beach for which the air ambulance had to called out. CREDIT: Dorset Police

Spain’s expats on the Costa del Sol and Costa Blanca have been shocked to see Brits return in droves this morning to the UK’s Durdle Door Beach in Dorset, after yesterday’s horrific tombstoning incident, which led to three people getting seriously injured.
AT least three people sustained serious injuries for which the air ambulance had to be called out as a result of ‘tombstoning,’ confirmed Dorset Police. Tombstoning is defined as the ‘act of jumping into water from a high platform, such as a cliff/bridge in upright/vertical, resembling a tombstone.’
Chief Inspector Claire Phillips of Dorset Police confirmed that they were called to the scene at 3.43pm yesterday (Saturday May 30) regarding the safety of people who were jumping off the cliff into the sea. Later, more officers were called to assist the ambulance service, HM Coastguard and the RNLI to help clear the area.
Phillips said she had to “urge people to leave the area to enable emergency services to treat the injured people.” The public was also advised to: “Avoid Durdle Door as the beach had to be closed due to two helicopters having to land for two separate incidents.” The public was also told to “expect high volumes of traffic as beach goers departed from the scene.”


As you can see from the photos (above and below), social distancing simply could not be maintained due to the hundreds of visitors at the beach yesterday. Yet, despite the incident, Brits returned to Durdle Door Beach this morning and tombstoning is reported to have continued on Dorset’s Jurassic Coast, less than 24 hours after people got seriously hurt jumping off the 70ft cliff, according to Dorset’s authorities.
Commenting on the incident, former Dorset resident Sam White, who now resides in Spain’s Torreblanca, stated: “It’s absolutely awful. Truly shocking to see the behaviour of some treating the lockdown like a holiday. Then there’s people like us working our socks off, trying to do the right thing… desperate for some normality and a family day at the beach. But we’re just not stupid enough to risk it. Let alone adding further stupidity to the mix by requiring air ambulances at a time when the NHS is already fully stretched and staff risking their lives everyday. Shocking!”