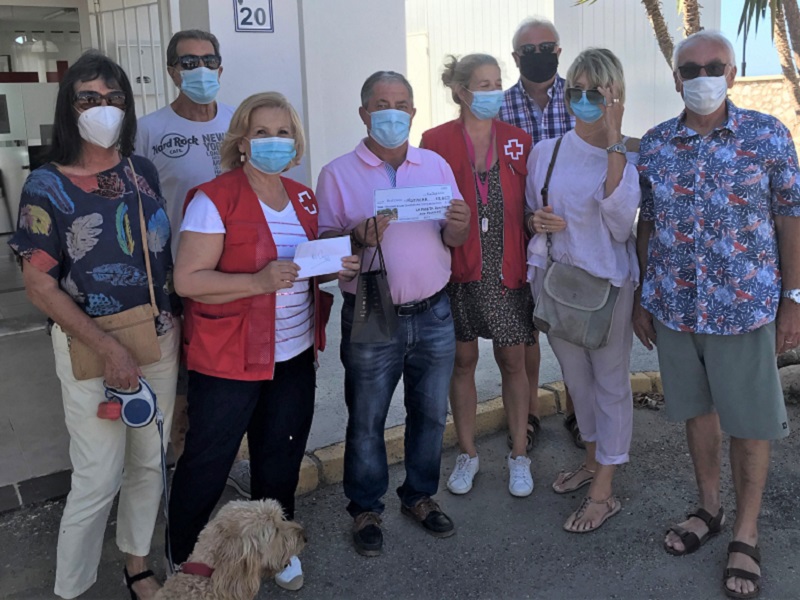 EXPATS in Mojacar’s La Parata have raised thousands for the local Red Cross for their work supporting needy families particularly hard hit by the coronavirus crisis.
On Friday the La Parata Mojacar fundraising team presented a cheque for €3,867 to Red Cross, Mojacar President Conchi and Vice-President Isobel, joined by Mojacar Council head of Maintenance and Services Martin Montoya in representation of the local authority.


The funds came from sponsorships and donations generated from the ‘Briggsy & Claysy Show,’ which was broadcast daily on Facebook, live from La Parata, throughout lockdown. The 30-minute broadcast every morning, which included a news slot, aired over eight weeks.
The idea was the brainchild of Rob Briggs, who was ably supported by his partner Penny Clayton. Their dedication to lifting the spirits of people both near and far with song requests, messages for loved ones and much more, was a labour of love, and the show gained support from Mojacar and around the world.
Parata residents Roy and Sue Oxley organised a ‘Show Sponsorship Scheme,’ through which individuals could sponsor a daily show with proceeds being donated to charity. The support was a resounding success with all further shows being sponsored. Along with Keith Holland, the team reached out further to people for donations. The response was amazing, as the final total raised confirms.
Support came from many La Parata residents, including 93-year-old Betty, whose ‘Hero Bears’ were lovingly crocheted and sent to NHS heroes. Sue Oxley and Jo Marriott made numerous Red Cross shopping trips to a local supermarket, regularly filling between 10 and 15 large bags.
La Parata community and friends have an excellent record for raising money for charities over recent years, with a total in excess of €35,000. All involved, both organisers and supporters, here and abroad, should be extremely proud.