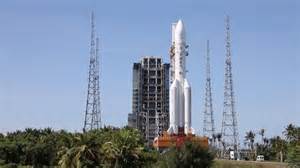 CHINA has successfully launched the Tianwen-1 mission to Mars, a first for the country and the second of three missions scheduled to lift-off to the Red Planet this summer.
A Long March 5 rocket carrying the spacecraft lifted off from the Wenchang spaceport on Hainan Island at 12.40am Eastern Time this morning. The China National Space Administration’s (CNSA) Tianwen-1, which translates as ‘Quest for Heavenly Truth,’ will now take seven months to reach Mars, arriving in February 2021.
Engines blazing orange, a Long March-5 carrier rocket took off under clear skies around 12.40am from Hainan Island, south of China’s mainland. Hundreds of space enthusiasts cried out excitedly on a beach across the bay from the launch site.
“This is a kind of hope, a kind of strength,” said Li Dapeng, co-founder of the China branch of the Mars Society, an international enthusiast group. He wore a Mars Society t-shirt, and was there with his wife, 11-year-old son and 2,000 others on the beach to watch the launch.


“It’s amazing that another nation has launched the case for Mars,” said Dr Katarina Miljkovic, a planetary scientist at Curtin University in Australia, adding that the world was no longer in a space race. “It’s more like this marathon of space that we all want to be running.”
China’s tandem spacecraft – with both an orbiter and a rover – will take seven months to reach the red planet, like the others. If all goes well, Tianwen-1, or ‘quest for heavenly truth,’ will look for underground water, if it’s present, as well as evidence of possible ancient life.
NASA, has already sent four rovers to Mars since the late 1990s.
The majority of the missions sent by the rest of the world to Mars since 1960 ended in failure.
This is not China’s first attempt to go to Mars. In a previous mission working with Russia in 2011 there were problems when the attempt ended prematurely as the launch failed.
Now, Beijing is trying on its own.
“As long as (Tianwen) Landa safely on the Martian surface and sends back the first image, the mission will… be a big success,” Chen said.