Police in helicopters are ensuring beach restrictions are followed 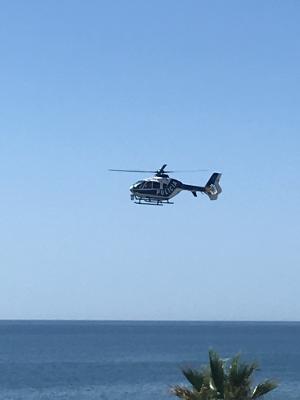 A RECENT video posted on social media platforms shows a helicopter from the Guardia Civil, hovering over the coastline in Palma and Calvia, Mallorca, to enforce the new restrictions which have been put in place.

This has seen bars and nightclubs closed, along with parks and beaches being restricted, in a bid to stop people meeting in large groups.
In Mallorca, the beaches have to be vacated between 9pm and 7am, with people being moved on by officers.
Speaking about the methods being used by police, a spokesperson for the Guardia Civil said they will be in force every night.
The statement reads: “The diffusion of messages using megaphones from vehicles and helicopters at beaches and parks is being carried out on a daily basis.
“This is happening to make sure the new rules established by the Balearic Islands regional government regarding the new timetables, are adhered to.”
According to reports, towns including San Antonio in Ibiza and Deia in Majorca are among 15 municipalities that could see tighter restrictions implemented in the coming weeks.
The regional government is due to confirm on Monday, September 7, which areas will be targeted first, and what measures are going to be adopted to reduce the spread of COVID-19.
Restrictions on people’s movement, enabling them to leave home only for school and work, or to carry out necessities such as food shopping, have also been discussed.
Regional health minister Patricia Gomez revealed the plans at a press briefing on Thursday, September 3, alongside the Balearic Islands government president Francina Armengol.
Mrs Armengol explained: “People could still go to work and school. The only thing we’re looking at doing is suspending social activity so we can halt the spread of the virus.”