Save My Life 5 – You won't believe your eyes! 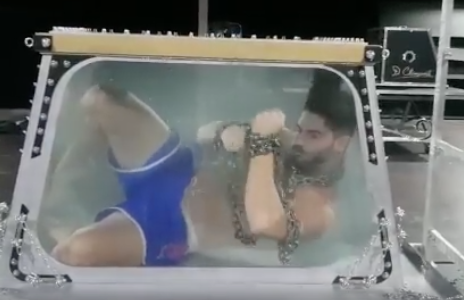 BENIDORM Palace is gearing up to work its magic next month as it hosts the hugely popular and successful fundraiser Save My Life 5, in aid of Benidorm Dog Homing.
The event raises thousands to help abused, abandoned and sick animals, and while the region’s finest singers, comedians and other entertainers normally put on an incredible show to raise cash, there has been a change of plan this time around.
Due to government restrictions, organisers have been forced to make changes, and five of the most presitigous illusionists in Europe will instead take to the stage in what promises to be an incredible show.


Palace owner, Christine Climent, said: “As we can’t have live singers on stage, due to Covid restrictions, and knowing how important the S.M.L. events are to be able to continue to help as many animals as possible, more so now than ever due to Covid, we at Benidorm Palace have decided to hold an International Magic Gala.
“Five of the most prestigious illusionists in Europe will be performing, you won’t believe your eyes.”

These include Christine’s son, David Climent, one of just three recipients of the much-sought after Merlin Award in Spain, who is also inducted into the Magic Circle.
He will be recreating Houdini’s world famous Water Torture Cell – an act not to be missed.
“I will be immersed in 450 litres of water and there are obviously risks. As such there will be two security people on stage in case anything goes wrong,” David told Euro Weekly News, adding he is practising two hours every day to ensure nothing does.
https://www.facebook.com/davidcliment.80/videos/10157786711833892

Co-organiser Dona Sandland, of Benidorm Dog Homing, explained how important the event and the funds raised are to the dogs’ futures.
“Every penny that people donate is greatly appreciated and amazing, but this event gives us a lump sum to pay for medical bills, transportation and so much more. It costs us up to €3,000 a month just in vet bills.”
As well as financial support, Benidorm Dog Homing also relies on the generosity of dog walkers and fosterers who offer their time and love to give unfortunate dogs a second chance.

For the last couple of months, Julie has been walking the dogs, and a week ago, she and husband Rob fostered Jimmy, who has many health problems but is already benefitting from having a loving home.
“We have no regrets at all. Jimmy has only been with us for six days but we can see a difference, he has put on a bit of weight. I would say to anybody considering fostering one of these lovely dogs to go for it.”
Sue Lewis and Alan Brenchley have fostered Libby and Buddy, two lively puppies now keeping their four other rescue dogs company.

The couple are heavily involved in dog rescue, and also work with another charity called BARK.
“It’s so rewarding to help, how could you not fall for these two.”
There will be two performances on Saturday, October 3, once again, compered by Tim Aimes.

“I volunteer at the dog shelter and at the moment, like many entertainers, I am time-rich. So, if I can donate some of that time to help, then I am more than happy to do it.”
Matinee doors open at 12 noon for the early afternoon show which starts at 1.30 pm. For the evening performance, the doors open at 6.30pm for an 8pm start.
Food is available and tickets are in high demand. Call Benidorm Palace box office 965851660 to reserve yours.

“These abused, abandoned and sick animals have no voice, but we do. Please come along and support them. Strict Covid regulations are in place,” said Christine, who donates the venue to support Benidorm Dog Homing.
In addition to strict regulations, such as temperature checks, hand sanitising and mask wearing, the Palace has been awarded a Sanitized Venue by Nightlife International – one of just two Triple Gold recipients in the Valencia Community.
An impressive €17,636 was raised at Save My Life 4, in March, rounded up to €18,000 thanks to a donation from Benidorm Palace.
Euro Weekly News is delighted to continue to be able to bring you a range of News that doesn’t cost you anything but your internet connection. Whether it’s Local Spanish News or International Entertainment News, we’ve got you covered!