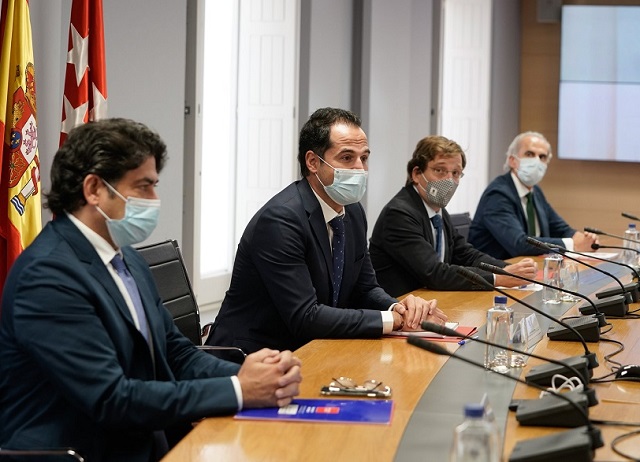 MADRID wants army help with efforts to contain the spread of Covid-19 in 37 districts of the Spanish capital under tighter restrictions since Monday due to a surge in new cases.

“We have decided to formally request logistical military support for the installation of marquees, carrying out tests and disinfection tasks in each one of the zones with restrictions in force”, Community of Madrid government Vice-President Ignacio Aguado announced at a press briefing on Wednesday following a meeting with Madrid President Isabel Diaz Ayuso and his regional cabinet colleagues.

Aguado said the regional administration is also asking the Spanish government for 222 National Police and Guardia Civil officers to be deployed to “carry out the inspection tasks for compliance with the corresponding quarantines and sanctions for failure to comply.”

A further item on the list of demands for central government is “an express reform of the current regulations to incorporate the 300 non-community doctors who were working on the first wave, and who we cannot now employ.”

Madrid regional ministers are scheduled to meet with members of the national government tomorrow Thursday, and are expected to ask that the changes come into force next Monday September 28.

Also expected on the same day is extending the number of areas in Madrid with restrictions on movement.

A further possibility is that limitations on opening hours and maximum numbers in shops and businesses will be brought in for the whole region, Public health deputy minister Antonio Zapatero confirmed.

As it is, since Monday there has been a ban throughout Madrid on gatherings of more than six people, unless from the same household, or work or institutional meetings.

In the 37 health districts subject to extra restrictions, movement in and out of zones is not allowed without a justified reason, like going to work, school or a medical appointment.

Public venue capacity is set at 50 per cent and shops and establishments have to close by 10pm. Parks and gardens are closed to the public.

Zapatero stressed the “main objective” is to avoid total lockdown for the whole of Madrid, which he said would have “consequences which could be tragic for economic and social sectors.”

But he added optimistically that “there are figurers on the horizon with allow for thinking that the situation is stabilising and with a tendency to improve.”

The Madrid administration is due to announce the new restrictions this Friday.

We hope you enjoyed this article “Madrid to request army support for efforts to contain the spread of Covid-19”.