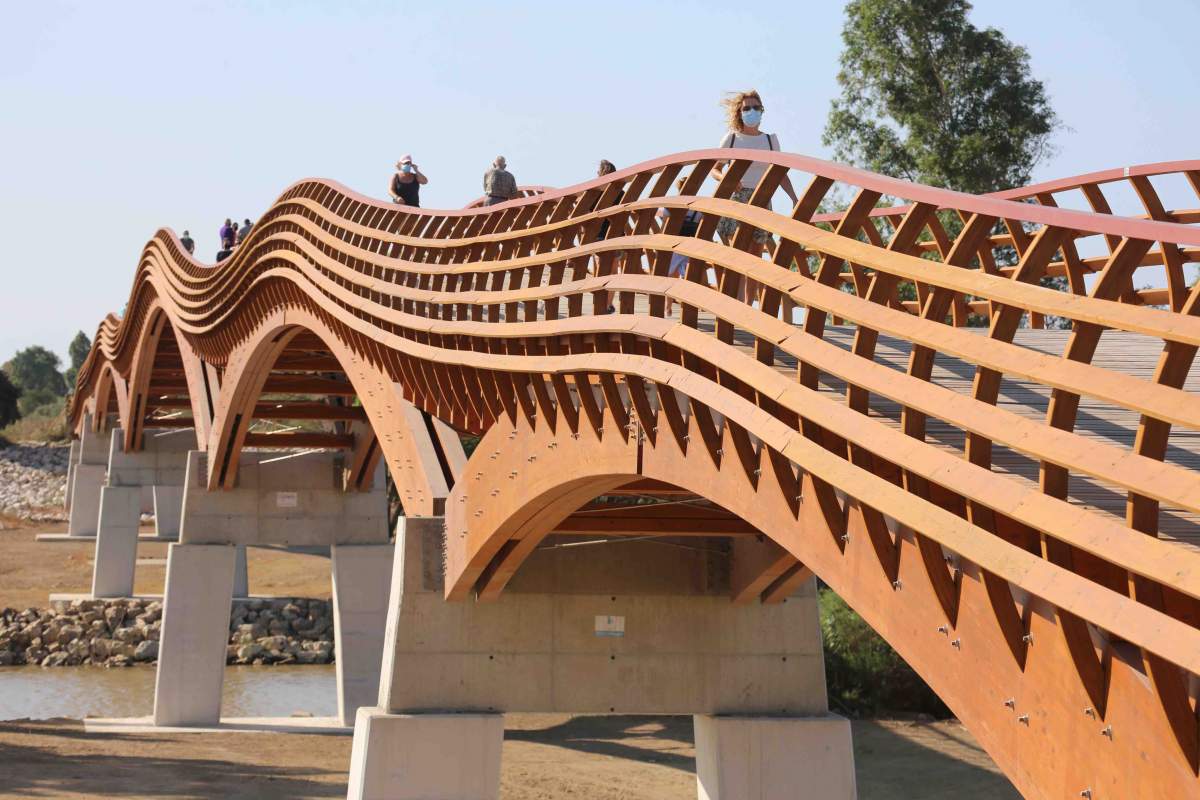 THE largest wooden pedestrian walkway in Europe, installed over the Guadalhorce riverbed, has now become the main landmark of the Senda Litoral.
The structure, 270 metres long and three metres wide is located next to the Natural Park of the Guadalhorce. The Malaga Provincial Council and the Town Hall of the capital have co-financed 50 per cent of the cost, estimated at 1.6 million euros.
On Sunday, September 27, president of the Malaga Provincial Council, Francisco Salado and the president of the Junta de Andalucía, Juan Manuel Moreno Bonilla inaugurated the wooden pedestrian walkway that connects the Paseo Marítimo de Poniente with Guadalmar.
Salado has highlighted that this walkway is unique in Spain and Europe and is going to become an “icon of engineering in Malaga” and a benchmark of the Senda Litoral both for its dimensions as well as its striking structure.
He added that it is a great achievement that 120 kilometres of the 184 kilometres of the Malaga coastline can already be travelled by pedestrians and that the Senda Litoral has become one more tourist attraction in the province.
This project is a magnificent example of institutional collaboration because the Provincial Council and the Malaga Town Hall have gone hand in hand in the drafting of the project, the financing and the execution. Likewise, the Junta de Andalucía has obtained the corresponding authorisations.
The wooden pedestrian walkway consists of seven spans: three correspond to the right bank of the river, another three to the left bank and a large central span of almost 70 metres that goes over the river bed.
The design of the bridge highlights the curved shapes of the main arches and its wraparound railings reminiscent of those on a ship. with inclined guardrails in order to make it non-scalable, in addition to helping direct the flow of rainwater from the deck and protect the lower beams. In this sense, a good mix of aesthetics and optimal structural efficiency has been achieved.
In the construction of the wooden pedestrian walkway, more than 200 tons of Scots pine wood of Scandinavian origin and almost 15 tons of stainless steel suitable for the marine environment have been used.
The use of a material such as wood allows its perfect integration into the natural setting. The durability of the wood has been guaranteed through a treatment process deep pressure treatment in an autoclave with water-soluble salts.
This, combined with the meticulous design of the constructive detail, ensures a long useful life, comparable to that of any other material, with minimal maintenance.
The wooden pedestrian walkway has been built by Media Madera Ingenieros Consultores, a leading Spanish company in the manufacture of wooden bridges, with more than 1,000 structures of this type installed in the country.
In addition to the wooden walkway, the works have also included, in a total area of ​​10,425.85 m2, a pedestrian path with a length of 305 metres and a width of six metres in practically the entire route, creating slopes on both sides of the path with natural stone and native vegetation.
We hope you enjoyed this article “New wooden pedestrian walkway has become an icon of engineering in Malaga”.
You may also wish to read “News in Brief from in and around the Axarquia region.”
Euro Weekly News is delighted to continue to be able to bring you a range of News that doesn’t cost you anything but your internet connection. Whether it’s Local Spanish News or International Entertainment News, we’ve got you covered!
For more Local Spanish News from Axarquia, head over the page on the Euro Weekly News website.
Euro Weekly News, the people’s paper, we lead others follow!